It is with much sadness that we have to inform you that Nigel has lost his battle with pancreatic cancer – He will be missed enormously by all of us here at Pancreatic Cancer Action. Ali Stunt (September 27th 2011)

This is Nigel’s story as he told it to the Mail on Sunday, published on 16th January, 2011.

Nigel has kindly given us permission to use it. 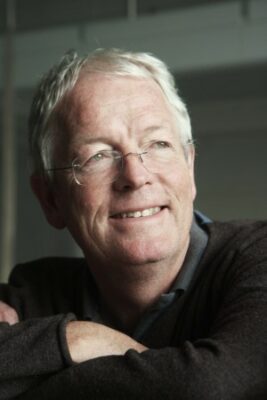 It had been a gruelling couple of weeks filming, yomping through the ice and snow with heavy cameras and tripod in one of the remotest places in Britain – the most southerly island of the Outer Hebrides, Barra, sixty miles off the wild north-west coast of Scotland.

We’d been shooting for a documentary series called An Island Parish for the BBC, and now my cameraman Aidan and I were sitting in the tiny air terminal beside the sandy beach where the planes land from Glasgow, heading home to London for a few days break.

Suddenly I noticed Aidan was leaning forward and looking at me in an odd way. ‘I hope you don’t mind me saying,’ he said awkwardly, ‘but your eyes seem to have turned slightly yellow.’

I checked in the loo mirror, but it was quite gloomy and I couldn’t really see anything wrong. At home in my flat in Islington that night, we had the lighting low and Sally Ann didn’t notice anything.

That all changed dramatically the next morning. ‘My God, you’ve turned completely yellow!’ Sal shouted in alarm when we awoke. It was weird staring back at my new, totally yellow self in the mirror; I had assumed I was in the peak of health, and had felt no aches or pains at all.

Things then moved incredibly rapidly – and never again will I curse the NHS. ‘You’ve got jaundice,’ said my GP an hour later. It was a Saturday, and they’d sent me straight in to his surgery. ‘It’s often caused by gall-stones. Not a huge problem but you need attention immediately. I’ll make an appointment for you to see someone at UCLH.’

University College London Hospital is my local general hospital. This was my first big piece of luck. I didn’t know it as the time but UCLH is a world leader in treating the liver and pancreas.

‘What, sometime this week ?’ I asked.

A few hours later I was in the ward being examined by a surgeon. It all seemed slightly surreal. I’d never felt better in my life.

One of the common causes of jaundice is blockage of the bile duct, which normally carries bile from the liver to the gut. The liver extracts potential toxins from the blood, modifies them, and passes them into the bile so they can reach the gut and be excreted from the body. If they can’t escape, the toxins then start to ‘leak’ back into the blood stream, and one – bilirubin – produces a yellow colouration, which is usually visible first in the whites of the eyes, and later in the skin.

An endoscopic camera examination revealed that in my case the blockage was the result – not of gallstones – but of a tumour in the pancreas. Sal and I were horrified to receive this news, well aware that it could well be cancer. A quick trawl of the internet revealed that pancreatic cancer has an appalling prognosis for most people. We passed the three week wait for the operation in a kind of dizzy dream, heightened by the fact that still at no stage did I feel remotely ill.

In fact, as it turned out, my rapid diagnosis was my second big piece of luck. Early symptoms of pancreatic cancer disguise themselves behind less alarming problems like weight-loss or diabetes, and are notoriously difficult to identify. Often it is simply too late by the time doctors realise what it is. The fact that my tumour had blocked the bile duct and made its existence obvious was a blessing in disguise. Of every one hundred patients diagnosed with pancreatic cancer, only ten can be operated on – so I was already in the ‘lucky’ ten per cent.

The operation is called a Whipple’s Procedure and in my case it lasted seven hours. Led by an outstanding surgeon, Charles Imber, the team removed not just the tumour but part of my pancreas, gall bladder, and parts of the bile ducts, bowel and stomach, in an attempt to try to prevent any potential spread of the tumour.

I was in intensive care for a few days, then moved to the ward. The registrar broke the news from the pathology lab. ‘I’m afraid your tests reveal that the tumour was indeed cancerous,’ he said. ‘But we have at least managed to cut the whole cancer out.’

I suppose Sal and I had been wildly hoping against all the odds that the tumour was benign, so knowing that this form of cancer has a high chance of recurring, in a way this was the lowest point. The prospect of my imminent death now seemed a real possibility; most pancreatic cancer patients die within six or eight months of diagnosis. Of course, contemplating our own demise is something most of us put off for as long as possible, but now I was being forced to confront it in a most unexpected way. It was almost more of a worry trying to imagine how my friends and family – and particularly Sal – would take the news. In fact, whatever their private thoughts, everyone was unbelievably upbeat and supportive.

Having stared death squarely in the face, I decided to put it back in its box and concentrate entirely on recovering from the operation. I’d been told that it was vital to get out of bed and walking as quickly as possible – even though this was painful at first – to get the lungs working and so help stave off infection. I took a few more steps each day, eventually pounding the ward and later the stairwells. Seeing the other patients, many of whom seemed to be in a far worse state than me, made me realise that I was even now lucky to be alive. I met a man who had undergone the start of the same operation as me, but he’d been told that the surgeons were unable to remove his tumour because of its proximity to a major blood vessel. Later, I saw the delight on his face as his wife and young children arrived for a visit. He too looked the picture of good health.

In fact, of the ten out of a hundred pancreatic cancer patients surgeons can operate on, in six cases they are unable to remove the entire tumour; so I was now in the ‘lucky’ four per cent.

Also hugely helpful was the fact that even in the ward I was able to keep on working. If I was a teacher or employed in a bank, I would no doubt have been signed off for months. The offices of my tv production company are just down the road from UCLH, in Soho, so a constant stream of colleagues were able not just to visit, but to bring in scripts and DVDs of rough-edited programmes I was then able to work on in bed. Within a month of the operation I was back on the Outer Hebrides with Aidan, filming the main characters on our new documentary series, Father John Paul Mackinnon, the Catholic parish priest on Barra, and his colleague in the next-door parish of South Uist, Father Roddy McCauley, who suggested celebrating my return to the islands with a wee dram, and promising to light candles and say prayers for me at Mass.

My treatment wasn’t over. I started a six-month course of chemotherapy at a neighbouring north London hospital, the Royal Free, designed to attack any rogue, post-operative cancer cells that may still have been whizzing around my system. I was on a trial regime; chemo pills every day for three weeks, along with a once a week, half-hour chemo drip; nothing for the fourth week, to allow the body to recover. Mercifully there were few side-effects. My hair thinned a little but not noticeably. The chemo tries to destroy cells which replicate (the principle characteristic of a cancer), so the palms of my hands and the souls of my feet (where the skin cells naturally get worn quickly and automatically replicate themselves) suffered badly. I had terrible blisters, which made walking very difficult on occasions, and handshakes could sometimes be embarrassing. But overall, I was able to function pretty much as normal, which I’m sure was a major contribution to my rapid recovery, both physically and mentally.

In late November last year I had a CT scan, and this, along with the results of blood tests, showed that the chemo appeared to have done its job, and as far as medical science was concerned, there was now no evidence that I had any cancer at all inside me. The consultant was beaming when she gave us the results. ‘Go away and enjoy Christmas,’ she said, and we all laughed idiotically. I guess they spend a lot of time dishing out bad news in the oncology department. ‘We’ll be monitoring you every three months with a scan and blood tests. See you next February. Have fun.’ Outside the hospital, Sal and I hugged with relief.

Again, the next few days had a surreal quality. I had been in the hands of doctors since early February, nearly ten months, which meant I had handed over responsibility for my life entirely to them – now I was on my own, feeling a little lost and lonely.

Talking to other ‘survivors’ helped. I had coffee with an inspirational woman called Ali Stunt, a mother of two young boys, who had surgery for pancreatic cancer three years ago at the age of forty-one. Ali had had months of unexplained back pain, and was only diagnosed after a CT scan paid for by her private health insurance. ‘My surgeon has said that had I waited four weeks for the scan I would probably not be here today,’ she told me. ‘Early diagnosis of this killer would help save so many lives.’

Ali went on to found a charity called Pancreatic Cancer Action to try to increase awareness amongst doctors and patients alike. She’s now become something of an expert on the subject. ‘The general population need to know about it, the symptoms and the risk factors – smoking, obesity and hereditary links.’

Like an alcoholic, I’ve realised I’ll never be ‘cured’ of cancer, and I am very well aware that there is a real risk of recurrence, but if you can get through the first two years your chances of survival increase dramatically. Never has the cliché ‘take each day as it comes’ been more relevant. It has been a joy to return to ‘normal life’. I wake each morning feeling more ambitious and vigorous than ever. And yes, all those moments I used to take for granted, I now relish; the warmth of the winter sun on the back of my hand, the sip of a fine wine, the smile of a stranger on a bus.

Has it changed my life? No. I have a job I cherish and a family, friends and a partner who I love. All I have ever wanted is the chance to continue as before. If I can function, I can be happy. Has it made me appreciate life more? A hundred times. There is no past, there is no future, so the saying goes, there is only now – and you can either seize the moment, or not.