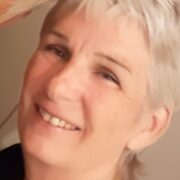 “I had symptoms for a very long time, at least two years”

Theresa Upton shares her story in the hope it helps others.

Looking back, I had symptoms for a very long time, at least two years+. I had experienced a few symptoms before diagnosis, but they were things that came and went, and other reasons were given. For example, I had back pain and shoulder pain, but I was doing a lot of computer work, so it was put down to that. The change in my bowel habit and changing colour of my stools was put down to drinking red wine.

I went to the doctors with a burning pain in my stomach that came and went. No comment was made, and then approximately before my diagnosis, I went back to the doctor with a strange stomach virus. No diarrhoea but pain, no energy and bloating. The doctor was worried but wanted to see me when I had the symptoms, which came back again and went. The bloating continued but I admit I did nothing about that.

I went to the doctors again 16 months later because I was so very tired, with hepatitis suspected and tests undertaken. At this stage, I really didn’t look unwell, and although I was very tired, I was fit and still able to walk for miles (I am a keen hill walker). Tests were undertaken, during which time I now showed higher liver levels, but this was not picked up as an issue.

In the weeks leading up to my diagnosis, I was getting pain under my left rib cage, and then for two weeks I lost my appetite completely and lost a lot of weight very quickly. I was diagnosed with pancreatic cancer and numerous liver metastases in September 2018 at the age of 58 after an ultrasound scan. I then had a CT scan and a biopsy. I had never heard of pancreatic cancer before, and my doctor was very surprised by the results.

I had 19 rounds of FOLFIRINOX and two immunotherapy trial vaccines. By June 2019, my scan showed a significant reduction in my pancreatic tumour and the metastases in my liver had either gone or reduced in size, with only one lesion measurable. In September 2019, I went on a chemotherapy break that lasted 14 months.

My next scan in October 2020 showed an increase in the size of t he pancreatic tumour, and the CA 19-9 levels in my blood were increasing steadily. I started FOLFIRINOX again at 80%, but found this hard, so the dosage was reduced to 60%. Unfortunately, the chemotherapy was not as effective and there was more growth before I become stable. My tumour was described by doctors as lazy because the growth was so slow.

During this time, the metastases in my liver remained the same and there was no further spread. I started to look for trials and emailed King’s College Hospital. After 13 more rounds of FOLFIRINOX, scans and a PET, King’s felt I was a candidate for a distal pancreatectomy and splenectomy. The only active cancer found in my body was in the tail of my pancreas.

I had the operation on the 13th August 2021 and I have made good progress. The histology report was very encouraging, and now I have to see what happens.

I am hoping that my story could be shared to help others. At my initial diagnosis, I was given three to 10 months. 37 months later, I am still going.