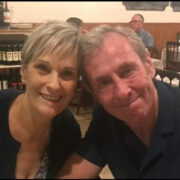 Sue shares with us her own experiences with pancreatic cancer, as well as those of her husband, Jim.

My name is Sue, I’m 67-years-old and on the 21st August 2019, I was diagnosed with pancreatic cancer. To say my world was rocked is an understatement. Up until my diagnosis, I had very few symptoms. I was beginning to feel more tired than usual, which I put down to my age and still working full time.

I had a slightly unsettled tummy but I had recently had a bout of food poisoning, so put the tummy situation down to that. The first realisation that something was serious was when I developed jaundice on Saturday the 17th and was referred to the hospital straight away. Over the next few days I began to have more symptoms; an aching right shoulder and constant itching on my hands and arms.

The CT and MRI scans revealed that I had a 2cm lesion in the head of the pancreas and it was operable. My blood checks were showing that my bilirubin scores were reaching dangerous levels and the need for stents to be put in place internally was discussed, or better still, an operation ASAP. Before I could be considered for the operation, I had to have a PET scan to make sure the cancer had not spread, because if it had, then the operation would not go ahead.

Thankfully, on Monday the 2nd of September I saw the professor who would be performing the operation. He told me that the PET scan showed no sign of a spread and that he would operate the next morning. The procedure I would have was called a Whipple operation.

The operation was a complete success. My recovery was swift and pain-free, and I was released from the hospital the following Monday. My appetite was poor, to begin with, but gradually improved over time with the lifelong medication that I was given. This was Creon tablets that had to be taken before any food or snack and a combination of vitamin tablets.

I returned to the hospital for a review appointment in October, where it was recommended that I have a course of chemo as one of the 26 lymph nodes they removed during the operation had revealed cancer.

I was put on fortnightly chemo called Folfirinox via a Picc line inserted into my arm. The first session made me very sick, with severe vomiting and diarrhoea. It was so bad I initially decided not to go ahead, however, the oncologist put me on a steroid anti-sickness tablet that really helped, and I continued with the treatment which concluded on the Easter weekend. Two weeks later, I got the all-clear, and my six-month scan in October was also all clear.

However, my story continues. As I have already said, I was diagnosed on the 21st of August, and my darling husband, who looked after me so well all through my awful journey, was then diagnosed himself in early December of the same year with pancreatic cancer. He developed jaundice on Saturday the 7th of December and was diagnosed on Tuesday the 10th of December. Unfortunately, his was more complicated. The lesion was 3cm and as it was so close to a portal vein, it was not at the time operable.

The plan was to have six months chemo to shrink it and then to operate. So for a few months, we both together for chemo, sat side-by-side hoping and praying that all would be well. But my husband had an awful time: He had chronic acid indigestion all of the time, which interfered with his eating.

He had stents put in his duodenum and bile duct, numerous endoscopy procedures and two massive bleeds due to the tumour spreading into the stents. Sadly, at the conclusion of his chemo, the tumour had not responded and in fact, had grown and spread to his liver. He declined daily and passed peacefully at home on the 25th of August with myself and our two lovely sons by his side.

I will always be eternally grateful for the care we both had, but so sad that we didn’t both make it through. I struggle daily with survivor’s guilt and wonder why did he have to suffer so much and die when it all went so well for me. I also ask myself if he would have coped better had the outcome been the other way around. He was a super fit guy, only 67-years-old, joined the army at 16, went to two Winter Olympic games, did countless triathlons and was awarded a BEM & MBE.

I miss him daily and wonder what the point was of leaving me here on my own when together we could have hopefully made a difference for so many people in our circumstances. We often talked about that as we sat side-by-side having our fortnightly chemo sessions.

Pancreatic cancer is evil and we must keep on striving to find a way to test and detect it as early as possible and not be fobbed off with doctors dishing out indigestion remedies. Thankfully, our doctors were on the ball, although my husband’s doctor did tell him to come back a week later, even though he clearly had jaundice: Needless to say, we ignored her and got a second opinion straight away, which so sadly didn’t save him.

In April 2021, the cancer came back in my lungs, and so I had five months of chemotherapy followed by a CT & MRI scan. Unfortunately, that showed that the cancer had now spread to my liver. So I was referred to the Royal Marsden for a trial treatment which I started in October 2021. The treatment went well, but a recent scan in April showed that the lung cancer had increased in size, so we decided not to continue with the treatment. I have now been referred back to my oncologist in the Royal Surrey for further chemo, and that will begin in June.

On the plus side, I am keeping really well and getting on with my life the best that I can, but with always, have the grief of losing Jim and my future prognosis hanging over me.