Simon Pollard, 44 from Cleethorpes took on the National Three Peaks Challenge with a target of the mammoth trek taking no longer than 24 hours. This epic challenge presented Simon with running and climbing up Ben Nevis, Scafell Pike and Snowdon. By embarking on this challenge, Simon raised vital funds and awareness for Pancreatic Cancer Action alongside other charities.

“My Dad was given his biggest challenge and he met it head on..

…I want to do the same in my small way and in doing so do something to help prevent anyone else having to go through the same ordeal.”

Simon’s backstory is all around one of the most inspirational people he’d ever met – his Dad, Ian Pollard. Ian fell ill out of the blue on one normal Sunday morning, after a few weeks of testing in hospital, he was quite bluntly and matter-of-factly diagnosed with pancreatic cancer. Much to the surprise and shock to himself and all those who loved him – this was January 2009. For the family, the news was particularly devastating as Ian was otherwise relatively fit and healthy. He fought the disease every step of the way through sheer grit and determination and against all the odds until he finally succumbed to it and passed away in November 2010 aged just 56. Right from the diagnosis, his doctors commented on his attitude and approach and how they’d never met someone with so much fight. It must have been a terrible time for Ian, yet he remained strong and determined and he will always remain an example both to Simon in the challenges he faces and set himself in his life.

The time felt right, and Simon was ready to do something to support organisations such as Pancreatic Cancer Action who work every day to improve detection and survivability rates of this terrible disease. 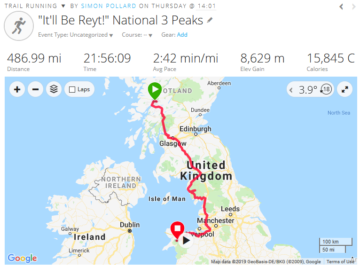 “My challenge is to complete the National 3 Peaks (Ben Nevis – 1345m, Scafell Pike – 978m and Snowdon – 1085m) consecutively in that order in one attempt. Whilst completing the course at all is achievement in itself and the added target of completing in under 24hrs is a further challenging stretch, I’m going one step further and setting myself the challenge of completing it in as fast a time under the 24hrs as possible, which inevitably means running as much of the distance that I can. By setting myself the challenge in this way I will be pushing myself mentally and physically much more than I have ever done and in some small way experiencing what it might have been like for my Dad to have lived with and fought his condition for as long as he did and find the strength needed to push forward and carry on. He was a remarkable man and an inspiration to many, and he would certainly have something to say about the challenge ahead!”

We checked in with Simon just before the challenge and this is what he had to say:

“With 2 days to go I’m 100% ready for this challenge and raring to go! I’ve done 400 miles of off-road training overall, taking in 42,000 feet of climbing so I feel confident I’m going to be able to do this challenge justice within the sphere of my control.

The training’s been quite tough at times, especially the weather – I’ve had sideways rain, 50+mph winds and lousy visibility but the cause has kept me going. I’ll be starting the challenge at 14:00 on Thursday and aim to complete it as fast as I possible (and safely) can. Regardless of whatever time I achieve, its mission accomplished when it comes to raising awareness and money. I really hope my efforts are helping in whatever tiny way I can.”

Upon completion of this heroic journey, Simon commented: 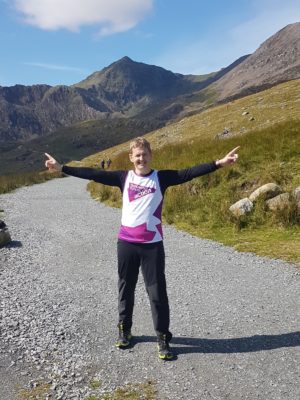 “It’s done! 21 hours 56 minutes and 9 seconds 🙂 My #1 goal was to complete it in under 22 hours so I’m delighted, although with an unplanned fuel stop, a loo stop and a detour into Glasgow because of a missed junction there’s at least 25 minutes could safely come off that, which has left me leaning towards wanting to do it again at some point to see how much quicker I could do it!

Overall Ben Nevis went really well, quite warm in the Glen up to about 2/3 of the way up and no rain, despite it being persistently dreary right up to the start. Scafell Pike was really hard going overnight with treacherous conditions as water was running down the path like a stream and Snowdon was the best weather, I’ve had all year, so the views were breath-taking.

Donations to PCA came in at £555 donated out of a total of £1,805 raised in total. I’ll keep the Just Giving site open in case more donations are to come but I sincerely hope what I raised helps you continue your great work and get closer to eradicating this disease once and for all. “

We are totally in awe of the strength, determination and guts Simon has shown throughout the course of this incredibly amazing challenge. We are so proud of his achievements and are delighted that he’s part of TeamPCA. With his support, we can continue to carry out our vital working in changing the future of pancreatic cancer and improving the quality of life for those diagnosed with this cruel disease.

It’s not too late to donate to Simon’s epic challenge: https://www.justgiving.com/fundraising/simonpollardpca