Shaun was 47 when he diagnosed with Pancreatic Cancer and 47 when he died. 5 days before his 48th Birthday he has left behind a beautiful wife and daughter. Becky is organising a big family funday event on the 30th August in Grimsby.
Here Becky Wright tells their story –

“On the 1st of December 2014 Shaun was admitted from the GP as had been unwell only about a week and blood tests showed a liver problem. After various tests and scans on 15th December we were given the devastating news he had Pancreatic Cancer.

I will never forget that day the doctor told us with his best friend Andy by our side. On 30th December we were told that the tumor could not be removed and that Chemo was the plan of action. Shaun as always turned to me and said ‘we’ll be alright mate’ he said this throughout his treatment he never believed he would loose his battle the only thing he was ever bothered about was not being here for our Daughter Lucia (9) who he idolised. So the plan was to FIGHT…
Shaun faced his chemo with courage and determination, we even went for scans at Cambridge Hospital after I found a surgeon who was amazing but unfortunately they came to the same conclusion – this was an inoperable cancer – only chemo would help. 12 chemo’s where planned in total over the next 6 months, so we got on with it, made plans, went on breaks with family in between treatments and he was doing well.. The 3 of us went to Skegness at Easter where we enjoyed normal family time, eating fish & chip, playing on the slots and walking along the seafront. A few days later he had his 5th chemo it seemed to go fine. We left Shaun well that afternoon with his betting slips for the Grand National and football and went off to the cinema. Shaun passed away that afternoon, sat on the sofa after eating an Easter egg and cutting the grass…Our world changed forever that day. We understood his cancer was serious but we needed more time as a family. 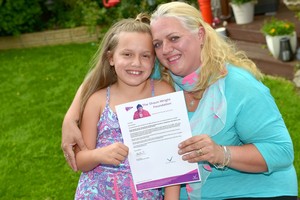 Our lives will never be the same again but hopefully with our help other famlies will not have to go through what we have in the last 6 months. Becky & Lucia x”