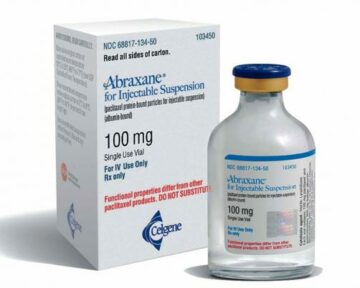 NICE, the institute that provides national guidance and advice to improve health and social care in England and Wales, will reappraise Abraxane® for treating metastatic pancreatic cancer.  The guidance was not due to be updated until October 2018.

Following months of campaigning by Pancreatic Cancer Action and our wonderful supporters, this is extremely exciting news for pancreatic cancer patients in England, who are currently unable to access Abraxane via the NHS as it was delisted from the Cancer Drugs Fund last year.

In October 2015, NICE published the Final Appraisal Determination and recommended that Abraxane should not be available to pancreatic cancer patients in England.  At the time, they said it should not be funded on the grounds that it is not cost effective.

When assessing new drugs and treatments – to decide whether they represent good value for the NHS – NICE looks at evidence on how well the treatment works compared with available alternatives, and the cost of treatment.  Following the new proposal from Celgene, the previous recommendation by NICE could be updated, and ultimately enable patients to have access to Abraxane via the NHS.

With only two weeks until this decision is made, we need your help.  Please call us on 0303 040 1770 or e-mail comms@panact.org if you would like to tell us how Abraxane has benefited you or your loved one.

What has been the situation up until now?

Abraxane® (also known as nab-paclitaxel) has been used in combination with gemcitabine within clinical trials and a phase III randomised trial showed that nab-pactlitaxel plus gemcitabine was superior to gemcitabine alone.

In December 2013, the European Medicines Agency (EMA) granted a licence for nab-paclitaxel, in combination with gemcitabine, for the first-line treatment of adult patients with metastatic pancreatic cancer.

Currently Abraxane® has been approved for routine use in eligible metastatic pancreatic cancer in the following countries:

In the UK: Scotland and Wales

Nab-paclitaxel in combination with gemcitabine has not been recommended by NICE for adults with previously untreated metastatic adenocarcinoma of the pancreas and has not been considered a cost effective use of NHS resources compared with treatments such as FOLFIRINOX and gemcitabine plus capecitabine (Gem Cap) for metastatic pancreatic cancer.

Abraxane® was dropped from the Cancer Drugs Fund in November 2015 (the only way patients could access it via the NHS in England).  We campaigned heavily for reinstatement including a petition, which closed on 4th March, and headline news on Channel 4.

While the economic modelling criteria NICE uses found that Abraxane® does not prove to be cost-effective, we believe that pancreatic cancer, with its low 4% five-year survival which has not improved in over 40 years, the fact that it is the UK’s fifth biggest cancer killer and that there are very few treatment options available to patients, should be considered as a special case. There is clear unmet need for this disease and NHS funders need to take this fully into account. Abraxane® isn’t that expensive either – according to the manufacturer (Celgene) in their submission to NICE, the cost of average use (3.4 months) per patient is £5,035.

In clinical trials, Abraxane® plus gemcitabine has shown to improve survival by an average of 2 months when compared to gemcitabine alone. This, on the face of it, doesn’t seem a huge improvement, but when the average life expectancy is a mere four to six months, two months more makes a difference to patients and their families. What is interesting from the trial data is that a few patients respond even better with some living up to two years. This accounts for just a handful of patients, but further research we hope will better understand why this treatment is more effective in some patients so therapies can be targeted.

We have also been told by patients and some oncologists that the use of Abraxane® plus gemcitabine offers a truly palliative effect by reducing some of the symptoms of the disease itself such as pain and weight loss.

There has been little or no improvement in pancreatic cancer survival for the past 40 years and to prevent access on the NHS in England to a life-extending drug when there are very limited options for pancreatic cancer patients is outrageous and cruel.

With Wales and Scotland in the UK allowing patients to be treated with Abraxane® plus gemcitabine on the NHS,  patients in England are being put at a disadvantage which is unfair. And, as the UK has some of the lowest pancreatic cancer survival rates in Europe, a decision not to allow patients in England access to the drug will mean that we will continue to lag behind countries such as Belgium, France and Germany and remain the poor man of Europe in terms of cancer survival.

We urge NICE to reconsider their decision not to recommend Abraxane® for treatment of advanced pancreatic cancer in England.