Rod was diagnosed with pancreatic cancer in 2005, later undergoing a Whipple procedure to help remove it. 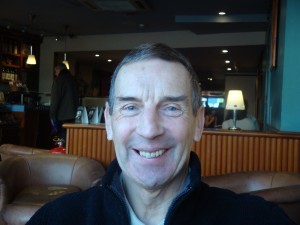 In October 2004, I visited my GP complaining of slight stomach ache. She did several tests, including blood tests, all of which came back clear. But I still had the pain, and although it wasn’t a serious pain, it was there all the time.

I felt the pain most in my lower abdomen. It wasn’t a bad pain, just a dull ache: it seemed to be there a lot – I didn’t notice it there all the time, but if I thought about it, it was there.

I went back to the GP again after she had done all the tests. She asked if the pain was still there. I told her I could still feel it. She then said that she would send me to see a specialist.

At the end of November I was referred to a Dr. Finch at St. Peter’s Hospital, Chertsey. On 6th December, he sent me for an ultrasound scan. They couldn’t find anything wrong on the scan as they couldn’t get a clear picture. On 13th December, I went for a colonoscopy and then had a CT scan on 16th December.

On 21st December, Dr. Finch told me there was a small tumour on my pancreas, that I needed an operation, but that they thought it appeared to be benign.

Then on 5th January, 2005 I was sent to Consultant Surgeon, Mr. Menezes. He said I needed to have an endoscopy, which was done on January 25th. On 2nd February, I went to see Mr. Menezes again for the surgical pre-assessment and on 5th February I went in and had the Whipples procedure.

The operation itself was about 8 hours long. I was in the High Dependency Unit (HDU) for a couple of days immediately following the operation and in hospital for a total of 12 days. The care I had there was absolutely wonderful.

When I came out of hospital it was just a question of relaxing, resting and slowly getting my fitness back, which took about 6 months.

After the operation, I went back to see Mr. Menezes about the histology they had done on the tumour. He said that they had thought it was benign but that they had in fact found pre-cancerous cells in the centre. So, he was really pleased that he had removed the tumour even though it had at first appeared benign.

As the cells were only pre-cancerous, I didn’t need any further treatment. I did though have 6-monthly check-ups for a couple of years then yearly check-ups after that. Then after 5 years I had another CT scan done which still looked okay, so I was then discharged!

Apart from the odd stomach pain I have been fine. I had these pains checked out though in case something had gone wrong inside, but nothing was found to be wrong, and they have put it down to being lesions from the surgery. This is probably something I will have to live with. I am lucky that everything seems to work correctly as far as the pancreas is concerned; the sugar levels and digestion all seems to work fine.

I am very grateful to my GP. She initially said she could see nothing wrong with me at all but then did say if I was still feeling pain that she would send me to a consultant and let him have a look. So she did her part by saying “I can’t find anything wrong, but go and have it checked.”

Dr. Finch couldn’t find anything initially either. It wasn’t until I had the CT scan that he spotted a little thing on the X-Ray and sent me to Mr. Menezes. After that the whole thing went very quickly.