Pancreatic cancer is the only cancer which has not seen an improvement in European mortality figures for both men and women, a new study published this week in the Annals of Oncology (( Malvezzi et al., (2013) European Mortality Predictions for the year 2013. Annals of Oncology 00: 1-9, doi: 10.1093/annonc/mdt010 )) has found.

The study looked at cancer rates for the EU as a whole (27 member states as at 2007) and also in six individual countries – France, Germany, Italy, Poland, Spain and the UK – for all cancers, and, individually, for stomach, intestine, pancreas, lung, prostate, breast, uterus (including cervix) and leukaemia.

Figures show that although more people are developing cancer (because people are living longer) overall, fewer are dying from the disease. The exceptions to this are for pancreatic cancer in both men and women and for lung cancer in women, thought to be due to huge rises of female smokers in the 1960’s and 1970’s.

Smoking is also a major risk factor for pancreatic cancer.

The study also confirmed that pancreatic cancer is the fourth leading cause of cancer death in Europe although it remains the fifth biggest in the UK.

Late diagnosis and few effective treatments for the disease are the main reasons why there has been no improvement in pancreatic cancer death rates. In fact, pancreatic cancer death rates are predicted to rise further in 2013 across Europe as can be seen from the following graph (( Adapted from Tables A1-A6 Supplementary data in Malvezzi et al., (2013) European Mortality Predictions for the year 2013. Annals of Oncology 00: 1-9, doi: 10.1093/annonc/mdt010 )) : 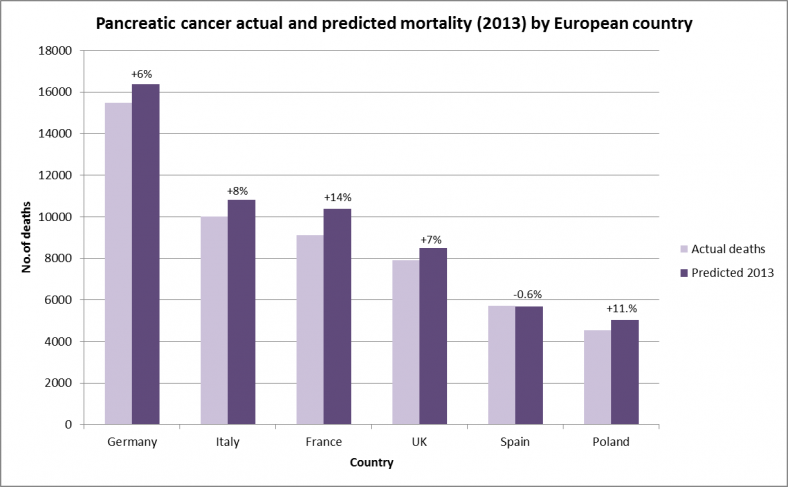