Pancreatic Cancer Action, the UK-based charity behind the hard-hitting ‘I wish I had’ adverts, plans to release a second series of adverts across the London Underground to raise awareness of the symptoms of the fifth biggest cancer killer.

The charity has seen a 200% increase in web traffic, and a particular spike in visits to the page which focuses on symptoms. “We’ve had so many people contact us to tell us that the campaign has successfully initiated conversation about pancreatic cancer, and have been invited to discuss the issues at a political conference in Spring.” continues Ali.

“The huge attention pancreatic cancer has received this week has provided us with an opportunity to bring forward a symptoms-led awareness campaign.  The new adverts will raise awareness of the symptoms of the disease to encourage more people to visit their doctor.”

The new creative features the same faces from the first round, Penny, Andy and Kerry, and still uses quotes, but focuses on how they and their doctors missed the symptoms of pancreatic cancer. Lines like “They call it the silent killer. But my symptoms weren’t silent” leading in to a list of symptoms to be aware of:

Due to lack of awareness of the disease and symptoms, people are often diagnosed too late for surgery, which is currently the only cure. The average life expectancy most people will face is just four to six months.
“Ultimately we want to see a dramatic increase in the number of people that survive this awful cancer,” continues Ali. “While no early detection device exists, awareness of the symptoms of pancreatic cancer is a key to saving lives.”
The charity is focused on educating the public and medical community as well as funding research into early diagnosis. They also campaign for more funding from the government, which currently stands at less than one per cent of all research funding.
If you have any of these symptoms ask your doctor to rule it out.
For more information, please visit www.pancreaticcanceraction.org.
The advertising for both campaigns was devised and created by creative agency Team Darwin. 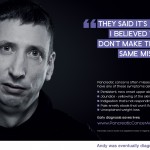 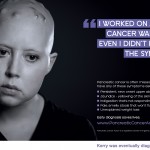 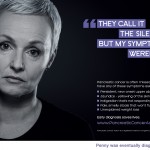