A study is taking place to test the accuracy of a potential urine test for pancreatic cancer. This is in part thanks to £1.6million of funding from the Pancreatic Cancer Research Fund (PCRF).

The team of researchers is being led by Professor Tatjana Crnogorac-Jurcevic and colleagues from Bart’s Cancer Institute. The study will recruit 3000 patients to take part and examine how effective three urine biomarkers are in detecting early stage pancreatic cancer. Patients with suspected pancreatic cancer, referred to any of the London hospitals taking part in the study will undergo a urine test. There will also be a control group of patients tested. These are people without symptoms but known to be at high risk of the disease, taken from the EUROPAC registry in Liverpool.

How does the test work? 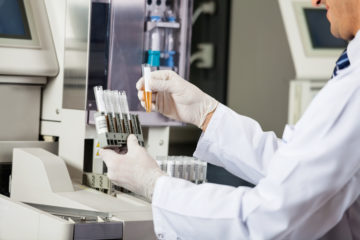 While the test is around four years away from reporting results, it could be an exciting prospect for pancreatic cancer patients. Early diagnosis is crucial as it’s the only chance patients have for potentially curative surgery. However, currently only around 10-20% of patients are diagnosed in time. A simple urine test, with results in as little as 24 hours, could make it easier to diagnose pancreatic cancer sooner and improve survival. In fact, the study’s lead researcher, Professor Tatjana Crnogorac-Jurcevic predicts that being able to diagnose the disease early, using this test, could mean five-year survival rises from around 6 to 60%.