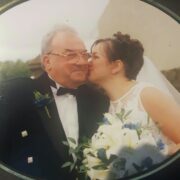 “The speed at which the disease took hold in this period, and the week before it, was absolutely shocking”

Lorraine McDonald tells us the story of her dad, Gordon.

My dad was diagnosed with pancreatic cancer after attending the GP a few times over a few months, with a low mood, more bowel/reflux/digestion issues than normal. He was referred to the hospital where he was advised he was suffering from gastroenteritis, and also to avoid any foods which caused him reflux/indigestion/bowel problems.

He was very down and fed up, slowly stopping doing things that would have been part of his normal life. Knowing himself that there was more to his health issues than what the medical professionals were telling them, he just wanted answers so that he would feel better and then start doing things normally again.

Just days before his diagnosis, dad felt unwell to the point that he was in bed, a new thing at this stage. He had another GP appointment but felt too exhausted to go, so a GP agreed to do a house visit. On the visit, the GP apologised for being so blunt, but on assessing him, felt he had bowel cancer. She then arranged for a hospital stay for assessment. Two days later, dad was advised he had pancreatic cancer which had spread to his liver, which was more than likely not treatable, however, his case would be referred to the once a week meeting of specialists in a Glasgow hospital.

This meeting never happened in relation to dad’s case, although we could see ourselves at this time, that there was no time for treatment, nor would he have been strong enough to go through it.

Twenty-two days after this diagnosis was given, dad passed away. The speed at which the disease took hold in this period, and the week before it, was absolutely shocking. It was night and day from just days before that.

Dad was a huge personality in both our family life and his local community of Cumbernauld, and his death, therefore, left a huge hole in many places.

The last 22 days were so horrendous, but some of them lovely at the same time, as we were able to have dad home for most of them, and nursed him to the end there, as was his wish, with help from community nurses.

Understanding the horrendousness of this experience, and realising that not too many people knew much about pancreatic cancer, myself, mum and sister, decided we could help towards changing that.

We have raised around £8000 currently, mainly from Bridal Balls, and a marathon, as well as January’s Jog Jan for Pan Can, with more events in the planning.

Alongside the funds, we have also worked hard at raising awareness of the dreadful illness, its symptoms and treatments. Dad was always fundraising for charities when he was alive, and so we know he would have been so proud of everything we have done since 2018. It’s just devastating that we are doing it in his memory and not alongside him.

*Lorraine will be running for London Marathon for Pancreatic Cancer Action in 2022 in memory of Gordon! Good luck Lorraine!