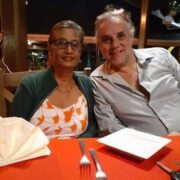 “I cared for him until it got to a point where I could no longer do it.”

Sharing the story of her husband, Peter, from the island of Trinidad, is Kaloutie.

My husband Peter Amann was 58 years old. He never had any symptoms of pancreatic cancer. His stomach was bloating but we chalked it up to him putting on weight. He did notice his urine getting darker. After approximately a week, he got worried and went to A&E on the 2nd of October 2020. After several urine, CT scans and MRI tests done, it was then that he was diagnosed with pancreatic cancer.

He was admitted, and due to fluids backing up in his stomach, a stent had to be put in to drain it before surgery. He was admitted to hospital and had the Whipple procedure done, and came home for Christmas and chemotherapy was due to start.

In January 2021, he started complaining of pains all over and vomiting. He was admitted to the hospital again, and after several tests, he was told that the cancer had spread all over his throat, back etc. He came home and had only just started chemotherapy. I cared for him until it got to a point where I could no longer do it.

He went to a palliative care unit where he passed away four days later, on the 21st of February 2021. He was a strong and healthy man with no symptoms or any health issues. Five months and he was gone, just like that.

He was born in Lincolnshire, England, and lived in Grimsby before moving to the island of Trinidad in the Caribbean. Here, he was a lecturer in Applied Science at a technical institute here, and he retired as the head of his department. We had a wonderful 36 years of marriage.