This November is Pancreatic Cancer Awareness Month and throughout the month we will be sharing a series of stories written by survivors of the disease. This is Jean’s story.

“I don’t think about my diagnosis too much, as long as I am well, I will carry on raising awareness of pancreatic cancer and enjoying the time I have left.” 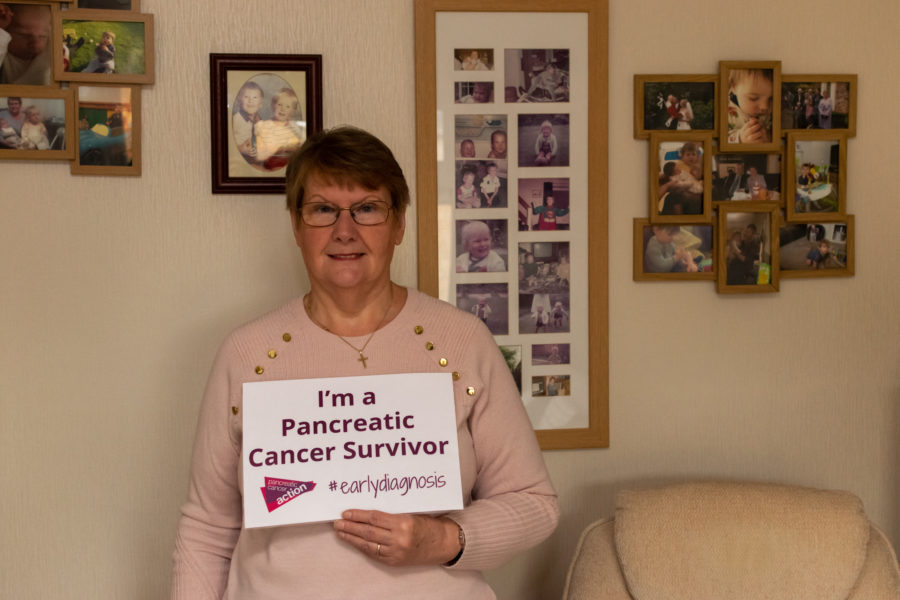 In June 2013, Jean went to see her doctor with extreme backache, acid reflux which wasn’t going away with antacid and pain on eating. Jean was also experiencing losing weight due to no appetite and feeling full after one mouthful of food.

The Doctor was concerned so sent her for an endoscopy, followed by a CT scan which sadly showed a mass on her pancreas. A PET scan showed that the cancer had not spread but that Jean’s tumour was inoperable.

Jean says, “Telling my two sons and daughter in laws the news was painful beyond words. I started planning for the worst, getting my affairs in order, making a will and telling my friends the news.

Strangely once this was done I felt easier and started concentrating on the fight ahead.”

Jean was given palliative chemotherapy and radiotherapy in the hope to shrink the tumour enough for surgery – currently the only cure of pancreatic cancer. This made her unwell and caused her to lose 5kg in one week.

Jean had a break from chemo over Christmas and had decided that if her tumour had spread or not reduced in size she would stop the medication.

However, the CT scan showed the best possible news, the tumour had shrunk by 6mm so she continued with her chemotherapy.

A further CT scan in May 2014 showed a further decrease in the size of a tumour which was originally 23mm to 12mm. The tumour was still too close to the bloody vessel to have Whipple surgery but the medication was able to stabilise it.

Jean has been stable since, she just has regular blood tests, regularly sees her oncologist and has a CT scan every two years to check on the tumour.

Jean says, “Since my treatment finished I have slowly got back to a near normal life. I love spending time with my three grandchildren and take a couple of UK breaks each year.

I see my friends as often as possible and love walking and reading. My time is taken up with raising awareness for pancreatic cancer and I have done fundraising and awareness stands in my area.

I don’t think about my diagnosis too much, as long as I am well I will carry on raising awareness and enjoying the time I have left.”