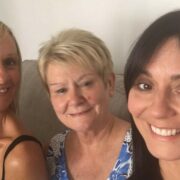 “How could this be happening, our mum was still young”

Jane Reeve shares the story of her mum, Pauline, and her pancreatic cancer story.

My mum suffered with tummy ache for a number of months before her diagnosis. After many visits and then phone consultations with her GP (due to COVID-19 they weren’t seeing patients), she had blood tests and stool tests, all coming back normal. The doctor only decided to send mum for a scan when she said she could no longer take the pain.

The following day after her scan, the doctor range mum and asked her to come to the surgery immediately as they had found something on her liver. She was sent for a CT scan and on the 18th November we were told she had Stage 4 pancreatic cancer which had spread to her liver.

We were devastated as a family, but we were told that chemotherapy would be offered and she would be referred to the oncologist. A dietician discussed her diet and advised her to take Creon and she would be assigned a MacMillan nurse. How could this be happening, our mum was still young, but we all said we would be there to support her every step of the way.

Three days later mum had a fall at night and she was taken to hospital. They couldn’t understand what had caused the fall. They ran a number of tests but nothing showed up. Four days later mum was allowed home, however, the deterioration had begun. She was so weak she could barely walk and had to come home with a walking frame. The pain was worsening and she found it difficult to eat, and when she did manage to eat, was being violently sick. Soon after mum’s breathing became very restricted and she struggled to take deep breaths.

She visited the Oncologist but unfortunately due to her rapid deterioration, she was not well enough for chemotherapy. Instead, she was prescribed a two-week course of steroids in the hope it would build her up and her next visit was scheduled for the 22nd of December.

She never made that appointment as she deteriorated so quickly. The MacMillan physio who had visited mum the previous week contacted us to see how mum was doing. We explained how she was deteriorating and she asked if we would be happy for her to bring along with her a MacMillan doctor (at this stage, we still had not been assigned a MacMillan nurse) to assess her.

They were amazing. Mum was given a mobile oxygen unit, fitted with a syringe driver, and a hospital bed was delivered to her home all within 24 hours. We had district nurses available 24 hours a day and the hospice visited mum to discuss her admission. Her wishes were to remain at home.

On the 24th of December, we were told to prepare for the worst, that mum wouldn’t make Christmas Day. She fought hard and was with us on Christmas Day, even though she could no longer speak. She stayed with us until 28th December, when sadly she passed away peacefully with her family surrounding her.

It’s been difficult for us as a family. We knew very little about pancreatic cancer before this. We thought we would have time to make more memories with mum. We didn’t realise how aggressive it could be. How could it be possible that five and a half weeks after her diagnosis, she had passed away.

At her funeral, we raised more than £1000, with which we donated £600 to Pancreatic Cancer UK and the remaining money to MacMillan. There should be more awareness of this terrible disease. We will continue to raise money in mum’s memory and hopefully, in the future, screening will be introduced to help detect this disease earlier, and maybe one day, a cure.