Cathie Serrao, from Bushey, is on a mission to raise funds and awareness of pancreatic cancer, which is the UK’s fifth biggest cancer killer.  On 30th July 2017, she will take part in the world’s largest cycling event, Prudential Ride London, in memory of her uncle who sadly passed from pancreatic cancer 5 years ago. 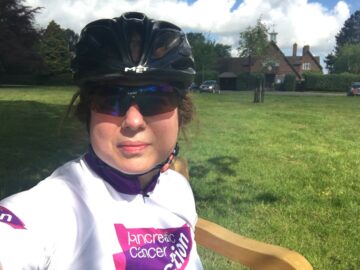 She is completing the challenging 100-mile bike ride, just one week after her 40th birthday, to raise money for Pancreatic Cancer Action who aim exist to save lives by improving early diagnosis of pancreatic, which has a survival rate of just 5%.

Cathie says “My Uncle complained of stomach pain in July. He was diagnosed late August and died just two months later. The speed of the decline was horrific to watch and since then I have known many families go through the same thing.”

“I know early detection can save lives as I worked with someone who has survived the disease due to early detection. I feel compelled to raise awareness so that people can get the right treatment as soon as possible.”

Pancreatic cancer receives just three per cent of cancer research funding.  Cathie says: “There are cancers out there that with amazing fundraising are not a death sentence, I would like pancreatic cancer to be the same, it shouldn’t mean the end.”

”As a charity, we rely on the generosity of individuals like Cathie to help us continue our vital work. Please back Cathie in her fundraising efforts so that we can continue research into early diagnosis and raise awareness of pancreatic cancer.”