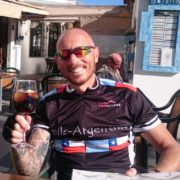 Whilst recovering from a severe injury, dealing with the loss of a friend from pancreatic cancer and facing a global pandemic, PCA supporter Steve Boston has shown immense dedication and commitment to the cause by taking on his very own Epic Insane Challenge and raising over £5,000! Here is Steve’s story:

Take on your own challenge!

Click here to find out how to take on your own challenge for PCA! You will be helping us to continue raising awareness and providing vital support for those affected by pancreatic cancer.

In March 2019, as I was laying in hospital bed with a broken back and sternum following a traffic accident, I decided to run the London Marathon the following year (2020) in memory of Les Lonorgan and try to raise £5000 for research into prevention and possible cure of pancreatic cancer.

Covid threw us all a curve ball and the 2020 London Marathon was postponed.

With regards to my fundraising plans, many of the coffee mornings, car boots and cake sales went out of the window, so we had to get a bit creative!

Also much of the fundraising momentum seemed to have stalled with each announcement that the marathon had been delayed; so I realised it was more about keeping my fundraising visible and in people’s minds rather than just hoping I’d receive donations for an event that we had no idea if it would happen or not.

I also realised I’d been a victim of my own success as I’d trained so hard for the VLM that people were commenting that now I’d easily complete the marathon.

So with this in mind I asked friends, family, and colleagues to throw me some suggestions that they thought would be worthy of a donation or two should I complete them. They were all tough and things beyond what I’d ever achieved previously.

The original idea was to pick one suggestion, but I agreed to attempt them all… and the PCA Epic Insane Challenge was born…

In addition to the virtual London marathon on 4th October 2020 and the real London Marathon in April 2022, between July 22nd 2020 and October 4th 2020 I will be attempting to complete the following:

There was a huge boost to donations as I was constantly posting updates every time, I completed a small part, so my fundraising was never out of the limelight and certainly couldn’t be forgotten.

In hindsight, it was the best thing I could have done to keep the level of awareness up.

As a brilliant side effect loads of people joined me on the challenges when they could. Some ran parts with me, some cycled while I ran, and some provided supplies at halfway, so it ended up having a real group feel with everyone playing their part. It was fantastic.

I’m very happy with the way the fundraising has gone, and the amount raised.

I thought it was a bold challenge to aim for £5000 but we have done it!

Thanks to you and everyone at PCA for giving me goals and a focus during what would otherwise have been a difficult 2020.

Quote from Annie at PCA:

“It goes without saying that we are absolutely blown away by Steve’s challenge in memory of Les; and we are truly touched by the team efforts of his friend’s family and colleagues to pull it all together. That was not a challenge for the faint-hearted, and Steve displayed dedication, commitment, and complete passion towards raising vital funds and awareness for pancreatic cancer and crucially, paying tribute to Les Lonorgan. We can’t continue our work without the support of fundraisers like Steve and we find him totally inspiring. 2020 has been tough, but Steve is tougher.”