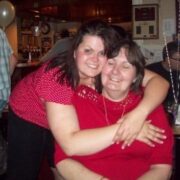 “I feel denied so many opportunities that my brother had”

Emily Overton shares the experiences of her mum, Edwina. Read more below.

My mum’s name was Edwina. I was her carer for the short months that she was sick. January to October 2009, she was thought to be a Type 2 diabetic. She was the right weight, age, and her lifestyle led to all the right diagnosis, but as weeks and months passed, we couldn’t get her sugars under control.

She’d have a salad and her sugars would rocket. She’d have a fun-size bag of chocolate and they would plummet. Nothing made sense.

Then she started going yellow, having stomach pain, started losing weight and having jaundice itch. My brother is a nurse and he had to practically drag her to hospital because she just thought she wasn’t doing enough for her diabetes as that’s what she was told.

She was in the hospital for a month where she had two stent replacements, as it kept blocking her liver duct, causing jaundice. She had scans that found an 8cm x 4cm mass that was wrapped around blood vessels, making surgery impossible.

On diagnosis, she discharged herself from the hospital and decided to have the best Christmas ever. During that weekend, my brother and his now-wife reorganised their wedding. My mum was incredibly poorly. I was administering morphine at home and taking care of her.

She was a few weeks into her 53rd birthday when she lost her battle to pancreatic cancer. She died the day after my brother’s birthday. I was the professional wedding photographer, and as my brother said I do, it was like the light went out. They had brought their wedding forward so that my mum could be there, and just over 24-hours later she was gone.

We didn’t get the chance to try any other medications to save her, it was so fast. Twelve years late, it still hurts. Part of me has been lost. I feel denied so many opportunities that my brother had. She was him graduate and get married. I graduated (twice) without her and she won’t be there at my wedding. I often have nightmares like this is all something that never happened and I wake thinking she’s still here, only to go through a split second of it all over again.

I’m so angry that there’s been no change in statistics and that there’s no difference. If she had been diagnosed today, we’d still have the same trauma, yet other major illnesses are so well known about and have major donors and days that are almost all together stopping people dying. I live in hope that this will really change in this decade. It’s about time.

Her 12-year anniversary was on the 16th of January 2022. I’m 33 now. I have rheumatoid arthritis and fibromyalgia and am therefore I’m disabled with chronic sickness. The loss of my mum is said to possibly be a contributor to fibromyalgia, and had pancreatic cancer had better statistics because of better research and funding, I might not be chronically sick now, and I’d still potentially have my mum here. So the impact of pancreatic cancer doesn’t just stop with the loss of my mum.