Don’t ignore the warning signs: New campaign in the Midlands aims to drive awareness of persistent tummy troubles as possible signs of cancer

On February 9th Public Health England launched a new Be Clear on Cancer campaign in the Midlands to raise awareness that tummy troubles lasting for three weeks or more could be a sign of cancer. In the Midlands around 55,800 people are diagnosed with cancer each year and around 26,100 die of the disease.

The campaign, which is being supported by local celebrities Nick Hewer, Frank Skinner, Emile Heskey, Julia Bradbury and Nitin Ganatra, encourages people suffering from symptoms such as persistent diarrhoea, bloating or discomfort in the tummy area to see their doctor. These can be signs of a number of cancers, including bowel, ovarian or pancreatic.

Around nine in 10 cases of cancer are diagnosed in people aged 50 or over  and the earlier it is diagnosed, the greater the chances of survival. For example, 98% of those diagnosed with early stage (stage 1) bowel cancer will live for at least one year. At a late stage (stage 4), this drops to 42%. However, a recent survey shows that only one in six (16%) over 50’s in the Midlands would see their GP if they felt bloated for more than three weeks and only one in four (24%) would go to the GP if they had experienced discomfort in the tummy area for over three weeks.

Furthermore, the survey found many residents are concerned that they would be wasting their GP’s time if they went to see them about such problems. 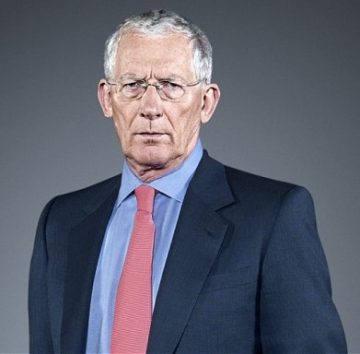 Midlands resident, TV personality and patron of Pancreatic Cancer Action, Nick Hewer, said: “Sadly, cancer is a disease that touches everyone at some point – we all know someone who has had it. Knowing that persistent tummy troubles can be a sign of cancer and that you should see your GP if you have them is important. Also, look out for each other – if a friend or loved one says they’ve had tummy troubles such as diarrhoea, bloating or discomfort for three weeks or more, encourage them to see their GP. While it may be nothing to worry about, it is always better to get it checked out.”

Nottingham resident and supporter of Pancreatic Cancer Action, Cliff Pettifor (74) has shared his story to support the campaign: “I’d always been healthy, and enjoyed running to keep fit. But between January and May 2009 I had several bouts of illness, feeling sick with an ache across my stomach. I went to my doctor, who, after seeing my blood test results, referred me to my local hospital in Nottingham. Following further tests, they found a growth in my pancreas. I was prepared for the worst, but was fortunate – my cancer could be operated on. It is seven years since my operation and, all in all, life is great – I work part-time and I still go running.”

Ben Anderson, Deputy Director for Healthcare Public Health at Public Health England East Midlands, said: “Cancer survival rates are improving, patients are twice as likely to survive a cancer diagnosis than they were 40 years ago. We know finding cancer early saves lives, but there is still more to do to make people aware of the warning signs and to act on them.

“Many people in our region are unaware that persistent tummy troubles could be a sign of cancer and are hesitant to see their GP if they have them – for example, a third of people don’t know that ongoing discomfort in the tummy area could be a sign, and around the same number say it isn’t serious enough to visit a doctor about.

“Our message is please don’t hesitate. If you have tummy troubles – including diarrhoea, bloating or discomfort – for three weeks or more, your doctor will want to see you, you won’t be wasting their time.”

Local Midlands GP, Dr Ben Noble, who features in the new campaign, comments: “This campaign aims to raise awareness that persistent tummy troubles could be signs of cancer. So if you have diarrhoea, bloating, discomfort or anything else that just doesn’t feel right for three weeks or more, go and see your doctor – please don’t worry or think that you might be wasting our time, you’re not. Although it’s probably nothing serious, if it is cancer, finding it early makes it more treatable and so we need to see you.”

Warwick resident Chris Edmonson (64) has shared her story to support the campaign: “I was diagnosed with pancreatic cancer two years ago. For some months previously I had been experiencing mild discomfort in my tummy, followed by discomfort in my upper back. After visiting my GP I had a CT scan which revealed that I had pancreatic cancer. The tumour was removed in surgery and I am now feeling hopeful for the future. My message to anyone noticing symptoms that are unusual – such as persistent tummy troubles –  would be to listen to your body and consult your GP.”

For further information about tummy troubles as possible signs of cancer, please visit nhs.uk/tummytroubles and for signs and symptoms of pancreatic cancer please visit: pancreaticcanceraction.org/about-pancreatic-cancer/symptoms/