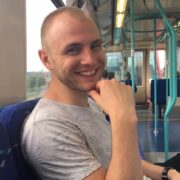 In a normal year, marathon runner Dan Godley may have taken part in our Jog Jan for Pan Can campaign. Instead, the 28-year-old is undergoing treatment for pancreatic cancer. Read more of his story below.

It was about July 2020 when my symptoms started. I would experience a tightness in my abdomen every night when I went to bed, which would remain until I got up and moved around in the morning. It wasn’t actual pain at this point and I believed it to be a minor food allergy.

After about three months of this problem persisting, I went to a private specialist using my work’s health insurance to investigate it further. An ultrasound of the area did not produce any worrying results for the doctor, and the specialist believed that I had a form of constipation where food moves too slowly through the bowels. After changing jobs and losing the private health care benefit, I stopped investigating the issue before a formal diagnosis was reached.

Fast forward to May 2021, and the problem was getting worse again. I went to my local GP, this time in an attempt to get a proper diagnosis. We did a range of blood tests, but these all came back as negative. The problem was the results of the blood tests were sent via text message and essentially said, “Your blood test results were negative. No further action required.” As a result of this closed loop of communication, I would have to ring up the surgery and explain the symptoms again to take further action. It was very disheartening, and eventually, I gave up again.

It was October 2021 when the symptoms finally became untenable. I had run a 35-mile ultramarathon on Saturday and was taking a well-earned week off running. On Tuesday, after going to the gym and then eating dinner with my fiancee, I experienced abdominal pain that was so intense I was struggling to breathe. After a week of these attacks becoming more and more frequent, I went to A&E.

It took about five weeks for me to be diagnosed, and I underwent many procedures in this time, including a PET scan and an endoscopy. The diagnosis was a huge shock to everyone, including the doctors. Upon receiving the PET scan results, which showed a tumour on my pancreas, their initial theory was that it was a very rare type called a Solid Pseudo-Papillary Tumour (SPPT).

I think this was primarily because of my age and health, which would make it very unusual for it to be pancreatic cancer. This was because there was also a cyst that had grown on my pancreas. It got so large that it blocked the bile duct off, resulting in me becoming jaundiced. That was what originally got picked up when I went to A&E in the blood tests that were conducted. Without the cyst growing to this size and causing other problems with my body, I would have probably not been diagnosed until the cancer had spread beyond the pancreas.

The tumour itself is complicated in my case. It is right next to a major artery that is essential to your digestive system. Without it functioning, you quickly die. I am currently undergoing chemotherapy treatment in the hope that it not only shrinks the tumour but also shrinks it away from this artery. If this is achieved, I will need surgery to remove the tumour, before undergoing more chemotherapy treatment.

If chemotherapy does not manage to impact the tumour in the desired way, I will need to either do more chemotherapy or the doctors will utilise other techniques, such as radiotherapy and Nano-Knife to influence the tumour away from the artery.

I have hope that the treatment will work, and there are some amazing doctors on my case.

To help pass the time during treatment, Dan has created a blog, titled Ebb and Flow, which represents the ups and downs of both the struggle against cancer, as well as the general trend of life itself. Click here to read Dan’s blog. We will be publishing a few of Dan’s blogs written specifically for Pancreatic Cancer Action throughout Jog Jan for Pan Can. Thank you again to Dan for sharing his story and collaborating with us on these pieces.