Celgene UK and Ireland, a subsidiary of Celgene Corporation (NASDAQ: CELG), today announced that its phase III clinical trial of 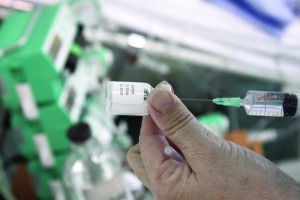 In the MPACT (Metastatic Pancreatic Adenocarcinoma Clinical Trial) study, nab-paclitaxel plus gemcitabine demonstrated a 59% increase in one-year survival (35% vs. 22%, p=0.0002) and demonstrated double the rate of survival at two years (9% vs. 4%, p=0.02) as compared to gemcitabine alone.

Nab-paclitaxel plus gemcitabine also demonstrated a statistically significant improvement in key secondary endpoints compared to gemcitabine alone, including a 31% reduction in the risk of progression or death with a median progression-free survival (PFS) of 5.5 vs. 3.7 months (HR 0.69, P=0.000024) and an overall response rate (ORR) of 23% compared to 7% (response rate ratio of 3.19, p=1.1 x 10-10).  Another endpoint assessed included time to treatment failure, which was significantly improved with the nab-paclitaxel combination compared to gemcitabine alone [(median 5.1 vs. 3.6 months) (HR 0.70, P<0.0001)].

Ali Stunt, Founder and Chief Executive Pancreatic Cancer Action states “Pancreatic Cancer Action welcomes the result of the phase III clinical trial which has found that nab-paclitaxel has produced a statistically significant increase in overall survival in metastatic pancreatic cancer patients when combined with gemcitabine. The 1.8 month increase in overall survival may seem to some to be only a small improvement. However, when we consider that the average life-expectancy on diagnosis for pancreatic cancer patients is only four to six months, an extra two months is significant and very much welcomed.”

Abraxane® (an albumin-bound nanoparticle formulation of paclitaxel) depletes surrounding stroma and will kill cancer cells but crucially it also produces molecules that block an enzyme called cytidine deaminase (CDA). This molecule normally destroys the drug gemcitabine. So, by using Abraxane® in conjunction with gemcitabine, the amount of gemcitabine getting into the tumours is increased thereby making it much more effective.

Based on the results of the MPACT study, Celgene plans to submit dossiers for registration in the US and Europe during the first half of 2013 followed by submissions in other countries/regions during the second half of 2013.

“We are excited by the results of the nab-paclitaxel MPACT study and the potential this treatment combination may bring to patients with advanced pancreatic cancer,” said Jean-Pierre Bizzari, Executive Vice President, Hematology & Oncology, Celgene Corporation. “As the largest phase III real-world clinical trial in advanced pancreatic cancer, the clinically meaningful findings seen across key study endpoints and patient subgroups are a reflection of our ongoing commitment to develop innovative new therapies in critical areas of need.”

The full final results of the IMPACT trial  (an investigational phase III study) will be presented at the American Society of Clinical Oncology’s (ASCO) 2013 Gastrointestinal Cancers Symposium in San Francisco, CA on Friday 25th January between 2:00 to 3:30 pm PST. Abstract: LBA #148: Final results of a randomized phase III study of weekly nab-paclitaxel plus gemcitabine versus gemcitabine alone in patients with metastatic adenocarcinoma of the pancreas.

Despite these good results, Nab-paclitaxel is not yet approved for the treatment of pancreatic cancer, although licences will be applied for. Nab-paclitaxel is approved for use in breast cancer in the UK and some pancreatic cancer patients may be able to have access to the drug by requesting it through their Primary Care Trust (PCT) but only if their oncologist feels it appropriate for their care.