Worrying number of people delay going to the doctors

A recent survey revealed that a worrying number of people in the UK would put off going to the doctors for reasons such as being embarrassed or not having enough time. Even when experiencing Jaundice, a life threatening condition, only 61% of people would go to the GP.

The survey showed that that 27% of people are too embarrassed to go to the doctors with 31% worrying what the doctor might find.

Pale and smelly stools, one of the symptoms linked to being ‘embarrassing’, is a sign of pancreatic cancer, which has one of the lowest survival rates of all common cancers. In the survey, only 27% of people answered that they were ‘very likely’ to go to the GP if they had a change in bowel habit.

Even though 61% agreed that they should visit a GP sooner if they have symptoms that concern them, people are clearly putting off going to the doctors which is a cause for concern.

“Early diagnosis of cancer is so important – if people are not visiting their GP with symptoms then they could be missing out on early diagnosis which often saves lives, particularly for pancreatic cancer.”

“People should never be embarrassed of going to the doctors, regardless of the problem, doctors will never judge and are there to help you.”

The survey also revealed that 24% say they are too busy to go to the doctor, 19% have too many other things to worry about and 37% are worried about wasting a doctor’s time.

“A lot of doctors surgeries do more convenient phone consultation which can save time and a lot of surgeries have early/late appointments for people who work full time.”

Ali Stunt, Founder and CEO of Pancreatic Cancer Action and 12-year survivor says, “We need to get the message out to the public not to be embarrassed or worried what the doctor might find and to put their health first.”

“With pancreatic cancer survival rates being under 8%, early diagnosis is vital. People need to go to their doctors if they are experiencing symptoms that are persistent and not normal to them.”

To find out more about pancreatic cancer please click here 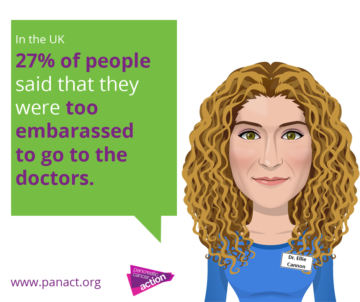