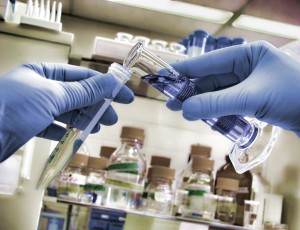 Scientists at the UK’s Barts Cancer Institute, led by Mr Hemant Kocher, a Consultant Surgeon and researcher, have found that Vitamin A could help break the ‘fortress’ surrounding pancreatic cancer to allow the body’s own immune cells to enter the tumour and fight it.

A key problem with treating pancreatic cancer is its resistance to chemotherapy and other agents. This is mainly due to the fact that pancreatic cancer has an unusually thick layer of scar tissue which builds up around the tumour. This scar tissue, known as stroma, is what prevents drugs getting through to the tumour cells to kill them.

What the researchers in this study found is that the stroma, which is made up of cells known as Pancreatic Stellate Cells (PSCs), also forms a barrier to some immune cells which prevents them getting to the tumour to attack it.

” All cancers have stroma, but in pancreatic cancer, it’s markedly thicker. It appears that the Pancreatic Stellate Cells in the stroma are targeting and interacting abnormally with certain important immune cells such as CD8 T-cells, and in doing so are trapping them within the outer portion of this scar tissue.”

The researchers looked at the numbers of immune cells present in cancerous pancreatic tissue taken from nearly 100 patients during surgery to remove a tumour or when a biopsy was taken. It was found that the amount of the immune CD8 T-cells varied between patients and that those with a greater amount of CD8 T-cells tended to have better survival outcomes after surgery to remove the pancreas than those who had lower levels of the immune cells. This suggested that there needed to be a way to breaking the stroma barrier to allow these immune cells to easily enter the cancer and to fight it.

Most pancreatic cancer patients are deficient in Vitamin A as the tumour causes a blockage in the secretion of juices from both the pancreas and the liver. The scientists at the Barts Cancer Institute looked at mouse models to study whether Vitamin A could help the immune cells enter the tumour and, by building on previous work done in 2011 (( Froeling et al., (2011) Retinoic Acid–Induced Pancreatic Stellate Cell Quiescence Reduces Paracrine Wnt–β-Catenin Signaling to Slow Tumor Progression. Gastroenterology 141 issue 4 pp 1486-1497 e 14))

, they showed that stellate cell behaviour could be modified by exposing them to all-trans retinoic acid (ATRA) which is a break-down product (metabolite) of Vitamin A.

” The Pancreatic Stellate Cells are the vitamin storing cells within the pancreas. In this study we found that restoring the the levels of Vitamin A in these cells prevented them from interacting with the CD8 T-cells and allowed more of the immune cells to get past the stroma and into the cancer. The Vitamin A did not effect the passage of of all other types of immune cells into the cancer, so it appears the Pancreatic Stellate Cells are being selective in which ones they are keeping out.”

With Vitamin A, the scientists have a potential way forward to target the stroma with either immunology and/or chemotherapy. Further research is now needed to develop this further.