For the entire month of November, Pancreatic Cancer Action supporter Vicki Stevenson-Hornby is on a one woman mission to raise awareness of pancreatic cancer.

For 30 days, the Macmillan HPB Clinical Nurse Specialist, who works for Wrightington, Wigan and Leigh NHS Foundation Trust, will dress head to toe in purple, including dying her blonde hair to a dramatic violet hue.

Vicki, from Hindley in Wigan, said: “Pancreatic Cancer has the worst survival rate of the 22 most common cancers, yet so many people do not know anything about the pancreas, or what it does, and are unaware of the early signs and symptoms of pancreatic cancer.

“I see the devastation which pancreatic cancer causes and wish with all my heart there was more that I could do to improve the outcome.

“In doing this very small thing, I hope to raise more awareness because the more people who know about pancreatic cancer, the more they can be aware of early symptoms and by detecting pancreatic cancer earlier, the potential survival rate is significantly improved.” 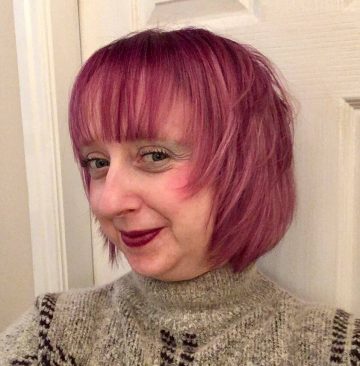 As well as the whole month of November being Pancreatic Cancer Awareness month, World Pancreatic Cancer Day will be marked on November 16 with the ‘Turn It Purple’ campaign calling for businesses and individuals to embrace purple; the symbolic colour for pancreatic cancer.

By shining purple lights on buildings or other structures in their community, wearing purple at the office, at home or at school or donating to life-saving research, more awareness and understanding about the illness will allow more people to be diagnosed in time for surgery – currently the only potential for a cure.

Currently, 8.2 million people die from cancer worldwide every year; out of which four million die prematurely (aged 30 to 69 years).

Vicki added: “There are around 280,000 new cases of pancreatic cancer each year and it is the fifth biggest cancer killer in the UK.

“Pancreatic cancer is chronically underfunded and has is reflected in the dire survival rates between three to six per cent, which haven’t improved for almost 50 years”

If you want to follow in Vicki’s purple footsteps why not order a Turn it purple pack and visit the TIP section of our website to find out how you can get involved this November!