UK doctors are too slow to refer patients for cancer tests, study finds 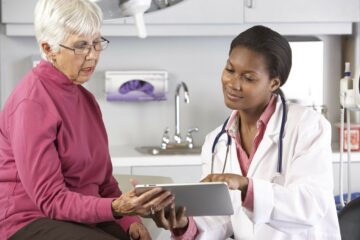 Research, published in the BMJ Open journal ((Rose et al., 2015. Explaining variation in cancer survival between 11 jurisdictions in the International Cancer Benchmarking Partnership: a primary care vignette survey. BMJ Open 2015;5:e007212))  has suggested that doctors in Britain do not have enough access to essential tests such as CT scans and MRI scans in order to diagnose cancer at an earlier stage.

According to the researchers, cancer survival is higher in all countries  versus that of the UK and, unsurprisingly, the countries with the highest proportion of cancers diagnosed at an earlier stage had the better survival rates.

In the study, 2,795 Primary Care Professionals (including GPs) were interviewed across 11 juristictions in six countries across the world including Australia, Canada, Denmark, Norway, Sweden, England, Wales and Northern Ireland. Various hypothetical scenarios during phone interviews were given relating to the diagnosis of various cancers.

61% of doctors in countries outside the UK said they would refer the patient for cancer testing while the figure was just 38% in the UK.

The researchers highlighted the fact that in primary care systems where there is a stronger ‘gatekeeper’ role (such as the UK) where GPs will manage the entry to specialist care and referral for investigative tests is also associated with lower cancer survival.

When looking at the waiting times for investigative tests and their results, the UK didn’t fare well either. Waiting times for a CT scan in the UK was, on average, 5 weeks compared to 3 weeks in the other countries. Australia for example, had a waiting time of less than a week.

For the results of the CT scan, the wait time in the UK was over 1.5 weeks on average while in other countries the average wait time was only 5 days.

This means that in the UK, the total waiting time to get a CT scan and its results is nearly 7 weeks.

Ali Stunt, CEO of Pancreatic Cancer Action said, ” It is becoming clear that the UK system where GPs are acting as ‘gatekeepers’ and do not have direct access to investigative tests or specialist advice, is failing cancer patients by contributing to their later stage on diagnosis thus reducing their chances of long-term survival.

“This is particularly true for pancreatic cancer patients, where, out of the nearly 9,000 diagnosed per year, 80% will have late stage, terminal disease and is one of the reasons why we have not seen significant improvements in survival for the past five decades.

“We urgently need to address this issue and in particular allow GPs to have direct access to investigative tests such as CT scans. “