Tribute to the wonderful Carl Denning 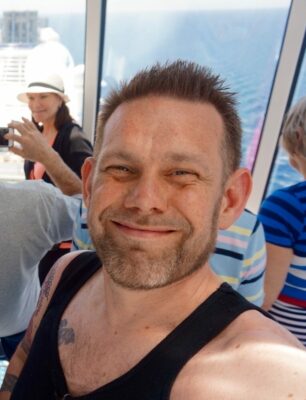 We were extremely sad to hear that Carl Denning passed away from pancreatic cancer on Sunday 18th June.  Our heartfelt condolences go out to Carl’s husband, Rob, his family and all his friends at this difficult time.

We got to know him well at Pancreatic Cancer Action.   Not only was he keen to help raise awareness in any way he could but he also raised money for PCA and other charities.

Carl was always an absolute pleasure to talk to and took his illness in his stride, which can be clearly seen by the way he wrote his blog. Since his diagnosis in 2012, he continued to run his street food business, Market Wraps.  He ran the business out of a horsebox, which was decorated as an allotment.  The successful businesst won the Best Looking Mobiler in the British Street Food Awards 2016 and a Small Business Sunday Award presented to him by Dragon’s Den Theo Paphitis.

While doing all this, he continued to take part in media campaigns to help raise awareness of pancreatic cancer.  Most recently, he shared his story on YouTube.  He also took part in our awareness video that Facing the future once you’ve been diagnosed with pancreatic cancer with two other patients.

In addition, he regularly took part in media interviews including this piece in The Sun and on ITV News.

Carl was a true gentleman, who touched so many hearts with his tireless work to help others, and will be remembered fondly by all of us at Pancreatic Cancer Action for all he did to support us, and cancer patients.