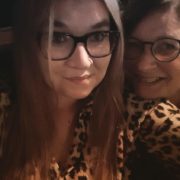 In the year that would have been her mother’s 60th birthday, Hannah Woollven reflects on her best friend, confidant, her soulmate, her mum, Tracey Woollven.

“On 24th April 2019, I heard the three words that changed our lives forever, “you have cancer”. It still makes me feel physically sick typing those words.

Mum lost her life to pancreatic cancer on 30th May 2019, five weeks after her original diagnosis. Although her battle was short, in those five weeks she showed me that she had the most incredible strength and compassion and taught me lessons that would influence the rest of my life.

Five weeks? Is that all we get? But how? She was herself, with no symptoms, no warning, just a month prior she was dancing the night away at my brother’s 30th birthday party, I’d give anything to revisit that night.

Mum had always had back pain, so we never thought there was anything sinister. Another trip to the chiropractor and she’d be alright. It wasn’t until her legs started swelling that we thought something was up.

I was working in Guildford and got a call from mum. “Hi sweetheart, only me, I’ve had a call from the doctor and they’ve said to go straight to the hospital, will you come and meet me there?” Even then, I still didn’t get it.

On the 23rd of April, mum was called into the Royal Surrey County Hospital after a call from her GP, who said he had looked at scans and noticed there was shadowing in her stomach area. Later that evening, she was moved onto the Millbridge Ward.

The 24th of April was the first time we hear the words: “You have cancer”. We are told the cancer is tickling her pancreas and is in her liver. For the next week, mum is in the Millbridge Ward and being monitored for her leg swelling and given blood thinning injections once a daily. We were told that her ‘performance status’ was very good, and you wouldn’t know anything was wrong.

We get an official diagnosis following the medical team meeting to discuss her case on Monday and mum was discharged.

Mum moved in with grandma whilst I liaised with the hospital, desperate for some support or information. We finally received a letter with the initial chemotherapy date of Thursday, 23rd May, one month after the initial diagnosis. Unfortunately, mum didn’t get to start the treatment as her cancer had progressed so quickly.

Mum started to feel worse, and I was called round to grandma’s one morning and we had to call an ambulance. Two lovely women came and one thing they said still sticks in my mind: “Hannah, does mum look a little yellow to you?”. Oh god, she did.

We went back into the hospital where mum had more scans and blood tests, but I still didn’t quite grasp what was coming next. I spent 12-hours a day in the hospital with mum. We played crosswords, watched Pose and RuPaul’s Drag Race on Netflix. I brought in games and trashy magazines for us to read.

Every morning I woke up to a text from mum and thought, “Right, game face on, don’t forget your smile and on we go”. But then one morning there was no text waiting for me when I woke up.

I rushed to the hospital and when I arrive, they were putting a blow-up heating blanked on and I am told that mum’s temperature has dropped overnight. The ward matron took me to one side and I asked, “Should I be calling my family when I get here?”.

Mum passed away on 30th May 2019, five weeks after initial diagnosis, with myself and her grandma holding her mum’s hands.

The weeks between mum’s death and her funeral were bizarre. Honestly, I don’t remember a lot of it. I’m pretty sure I was purely running on adrenaline and spiced rum, and my mind has been kind enough to soften my memory of those initial weeks. I remember turning to my brother and saying: “I actually feel ok”, and he said, “Me too”.

But I wasn’t living in reality, because I couldn’t accept that this was my reality. That false sense slowly crept away as it became apparent that our lives had been impacted forever, in every way you could think of.

Friday, September 24, 2021, would have been Tracey Woollven’s 60th birthday. Rather than spending the weekend on one of our girly trips, I am writing our story in the hope that it can, in some small way, contribute to another family getting diagnosed and treated faster.”