Tom completes the Prudential Ride London, in his own way.

Tom Westwood recently took part in the Prudential Ride London and tells us his inspiring story of finishing the race in his own way, the struggles he faced and the people he met along the road.

It all began in the summer of 2013 while stood on London’s Putney Bridge. Having been in London for my cousin’s wedding we found ourselves caught up in what appeared to be a cycle race. There were hundreds of cyclists speeding passed us over the bridge, all with smiles as wide as the Thames! A quick look online revealed what exactly it was that we were seeing. I remember saying at the time “I’m definitely doing this!”.

Fast forward five years and with a huge thud, a magazine dropped through my letter box. ‘Congratulations you’re in!’ In large letters across the front of the letter brought a nervous excitement to me. The first time of entering the Ride London ballot and the first time taking part in a mass participant cycling event. Surely it couldn’t be that difficult, I thought!

I had always decided that if I did get in, I would raise a few pounds for a charity and choosing PCA was an easy decision for me. I had unfortunately lost my grandma to pancreatic cancer 12 years ago. At the beginning of this year, I had also lost a close family friend and work colleague, Gordon, in almost the same way. I then realised that there had been very little advance in terms of early diagnosis or treatment for this terrible cancer and it made the choice of charity easy.

Having recently moved in to a new village with my partner Claire and our children, she had noticed that a group of cyclists seemed to be meeting regularly at the village hall. After a little more detective work online we found that a local cycling group called Tour De Queniborough (TDQ) meet 3 times a week. I thought, perfect! and went along for the next meet up. I was met with open arms and welcomed in with a group of strangers who, looking around, clearly knew their cycling stuff! Training started right there. 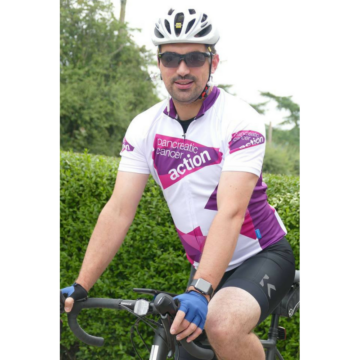 By now I had bitten the bullet and upgraded my bike, it was getting serious now! Carbon fibre forks, more gears, hydraulic disc brakes the works. This was the machine for getting me across the finish line! The only thing that stood in between me and the Ride London was to train myself on a long ride. I chose to ride to my family’s bungalow on the east coast, an 86-mile journey from my house.

My plan was always to ride up onto the seafront, I visualised the finish for quite a few miles (it was also next to a pub!). Finally, riding up that slope onto the seafront felt amazing, I’d done it, my longest ride! My parents were both cheering while wearing t-shirts that PCA had sent them and waving a bed sheet that mum had painted a message onto. Then to my complete surprise, Claire popped up from behind the bed sheet! She’d decided to come and see me finish as a surprise. I stood there and took in the views, the locals came to congratulate me and threw a few pounds into the donation bucket. A well-deserved beer with fish and chips, followed by a four mile walk saw me sleep very well that night!

The weekend of the Ride London soon rolled around and we found ourselves in the ‘big smoke’.

I was up and ready to go by 6.30am with my water on board, my morning breakfast of porridge and all labels attached to bike. My bag was all ready for the finish and so, off we went to start the event.

My dad dropped me off as close to the start line as possible in the car, together with my son, Archie. It wasn’t long before I found myself at the start line where the DJ was playing suitable songs for the moment. YMCA blasted out over the tannoy before ‘why does it always rain on me’ as the drizzle started.

At 8.16am we set off, it felt good and there seemed to be plenty of room to cycle easily without being in anyone’s way. The drizzle had now started to turn into rain, which didn’t end. By 5 miles in I was averaging 20 miles an hour, I had been told to expect a faster than normal speed due to the roads being closed off to other transport. I was soaked to the core but loving every bit of the experience. The support from locals, families, other charities on the way round was incredible. Feeling like a proper athlete I carried on, reaching the 50 Mile mark in under 3 hours.

I noticed every 500 yards or so, people repairing their tires from the debris that had been washed up onto the roads from the sudden downpour of rain. By the time I got my first puncture, I was into the Surrey countryside where the trees overhung the road. Supported by two locals one of which had a stirrup pump I was on my way again, but it wasn’t long before another puncture hit, then another and over the next 13 miles I saw 4 inner tubes, on my front wheel alone.

By now I was so wet my hands looked like that point when you’ve been in the bath for too long, my phone had stopped working and wasn’t sending any information to Claire and my parents. I reached a maintenance hub, desperate for some support but I was unfortunately turned away.

With little choice, I knew my day had come to an end. A phone call to Claire on a very helpful St Johns ambulance worker’s phone lead me to the realisation that I’d be taking no further part in the ride.

My bike on the back of a lorry and me in the cabin next to fellow rider Vicky, who’d also been forced to stop on the grounds of ill health, were taken to the local train station. A 40 minute train ride saw us back at Waterloo station. In the dry and warmth of the train myself and Vicky had managed to patch up my wheel and made the decision that, if we could get back on the course, we would get over the finish line. At Trafalgar Square we were able to do so and the pair of us limped down the finish straight, it didn’t feel right, knowing that we hadn’t completed the full distance. 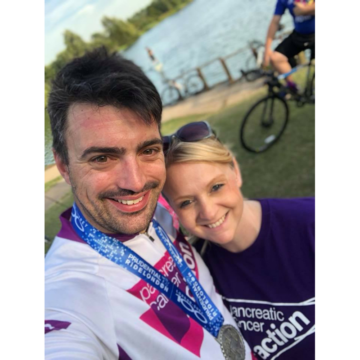 My medal was handed over to me and was swiftly put into my jersey pocket, I couldn’t put it around my neck as I hadn’t managed what the hundreds around me had. Meeting my family in green park saw the emotion of the day pour out, we all stood there in tears. I felt like a failure even though my fundraising target of £500 had been smashed and it was closer to £1000. I’d already put a message out to say that I was sorry that I was unable to complete, I couldn’t understand why people were still donating money, I hadn’t finished the course!

We’d decided to do the remainder of the miles down to my grandmother’s memorial bench near our home and as soon as possible. So, on the Wednesday following the ride I found myself setting off, again.

On the course I was delayed while a gentleman was being treated at the side of the road, fellow cyclist Nigel Swanson who sadly lost his life on the day. I wanted to combine my miles with the amount he needed to do to complete the challenge and so I added these to mine so that he could finish too.

As I rode down the long driveway towards the car park and lake where the bench is situated, I saw my mum cycling towards me. A high five took place as we passed so hard I think we both nearly fell off! Through the gates was the lake and to my surprise there stood my family, friends and Gordon’s wife Di, who for the first time since losing Gordon had got back on the bike to join me.

The final leg came and I stopped my trip computer. 43 miles in 2 hours and 20 minutes and caught up with Di who hadn’t stopped peddling since she’d got to the lake. Claire cycled ahead to the finish line and myself and Di held hands as we crossed the makeshift finish line at Grandma’s bench. My granddad, friends and family cheering as we completed it. Now I felt like I could accept the medal, placed over my head by my granddad.

I had finally completed what I set out to do, just maybe not quite in the way I thought it would go! I’m in awe and so thankful for the kindness and support given by so many, to the local radio stations who had me on to talk about the ride and raise awareness of the charity, to my parents for all their support along the way and to Claire for putting up with my new obsession (and for letting me keep my bike in the dining room!).

Ride London… you and I have a score to settle!! See you next year.

We would like to say a huge thank you to Tom for being an amazing supporter and congratulations for completing the race. You truly deserve that medal and we hope you wear it with pride.