The Health Foundation has recently published a report (November, 2019) analysing the NHS workforce and the current challenges it faces. The report contains some concerning statistics regarding the health workforce and its ability to meet increasing demand.

Shocking number of nurse vacancies in the NHS

Recent headlines have shone a light on the number of nursing vacancies, with approximately 40,000 posts empty across the UK. This report delves further into the issue, examining how nurses are trained and recruited and whether the government is on target to close the gap. The report also examines NHS staffing and spending compared to other countries to determine how other OECD countries allocate resources to their workforces. 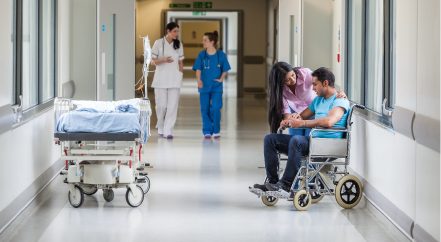 The amount of work nurses are having to complete has risen by almost a quarter, but nursing numbers have only increased by 1%.

Understanding the NHS workforce is not always straightforward. When politicians promise to increase NHS spending or the number of people working within the health system, it can be difficult to know how helpful this would be or measure when it is done. The Health Foundation began by looking at changes in the number of full-time equivalent nurses in post compared to demand. This showed that in the period from 2010 to 2017, health service output increased by 23% but nursing numbers have hardly risen. This means that the amount of work nurses are having to complete has risen by almost a quarter, but nursing numbers have only increased by 1%.

How can this issue be solved?

Increasing the number of nurses in the health care system can be done in one of two ways. Either by training more nurses at home or recruiting from abroad. Currently, one in six NHS nurses were born outside of the UK, the health care system relies on them, and 10,000 EU nurses have left the NHS since the 2016 Brexit referendum. Sensible immigration policies are required to ensure that the NHS can prevent further staff losses and continue to recruit ethically from abroad.

University and work-based training is the second way of recruiting. Nursing must be an attractive prospect for students and courses need to be both accessible and supportive to encourage retention. The report shows that 24% of adult nursing students currently do not complete their training and drop out before the end. Students need to be financially and emotionally supported throughout their training to complete their courses and enter the workforce.

These factors combined have led to a reduction in nursing numbers to just 8 per 1,000 members of the population, under the OECD average. These numbers are currently unlikely to change drastically as currently, around 30,000 nurses graduate a year, less than half the number than in some comparable countries such as Australia.

The problem is not limited to nurses

The UK spends less of its annual GDP on healthcare then many of our nearest neighbours and lack of staffing is starting to impact patients using the NHS. The problem is not limited to nurses. There are around 10,000 doctors’ vacancies across the health care service, and these are more severe in some areas than others. Waiting times in accident and emergency and for surgeries are growing. Treatment targets for cancer have not been met for the past six months and though the NHS Long Term Plan contains some ambitious and impressive targets, it is not clear how they can be met under current conditions.

In the run-up to the next general election, all of the main political parties have committed to increased NHS funding. However, a long-term workforce plan is yet to be released and it is not clear how the NHS will recruit and retain the staff it needs to deliver the increasing demand for care.

The Health Foundation report contains some serious findings for the health care workforce and Pancreatic Cancer Action is calling for these to be addressed in the policy. Early and fast diagnosis is essential to increase the chance of surviving pancreatic cancer.

The NHS needs to be adequately staffed to ensure that patients are referred, investigated and treated promptly.

Australia for example, had around 80,000 nurses graduate last year and has more nurses and doctors per head of the population. This may be helping to diagnose cancers earlier. The 5-year pancreatic cancer survival rate in Australia is 15% compared to under 7% in the UK.

The UK’s ambitious target for half of all cancers to be diagnosed at an early stage will not be possible if we cannot attract and retain the workers that the NHS needs. Patients with pancreatic cancer should be able to be confident that they have timely access to the best treatments and care. Therefore, we are calling for the next government to release a workforce plan for the NHS with short- and long-term solutions to the staffing crisis. We want to see a policy that specifically addresses shortages in vital cancer staffing groups such as radiologists and cancer nurse specialists.