Ian Glass, from Denbighshire, has decided to take part in the Monte Carlo Classique, in his 1953 Ford Popular, ‘The Flying Tortoise’, for the second year running to help raise funds and awareness for Pancreatic Cancer Action.

The Flying Tortoise, a 1953 Ford Popular, was rescued from being abandoned in the open for many years to take part in rallies and raise money for charity.

It has completed two Le Jogs and two Monte Carlo Classiques and raised over six thousand pounds for charities. All money raised from each event has been donated to the charities they’ve raised money for directly, with the crew paying for expenses out of their own pocket.

Ian says, “With just 30 brake horsepower, three gears, cable brakes, and vacuum operated wipers, it is the most inappropriate rally car but has beaten many more polished machines, resplendent as it is in two-tone green and rust!” 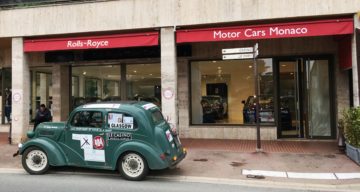 The combined age of crew and car is 203, with the car being younger than either of the crew!

The Flying Tortoise will be driven to the start in Glasgow and once it achieves its third finish in Monte Carlo, it will be driven back to North Wales, as it was the last couple of times – completing an all-round trip of nearly two thousand five hundred miles each time!

Ian and his little car will be taking the same route as they did last year, with a starting point in Glasgow and passing down through Banbury on the way over to Monte Carlo.

If you could spare a couple of hours in either of these locations to help raise vital funds, it would be greatly appreciated. Last year, Ian’s wife managed to collect £80 after standing by the car for a couple of hours with a collection bucket!

If you are available to volunteer in either of these locations, The Flying Tortoise will be making its annual visit to Glasgow on 30th January and the 31st January in Banbury.