On Sunday 4th October 2020 in the pouring rain, amidst a global pandemic, 43,000 runners took to their local roads, parks, and trails to take on the 40th London Marathon, virtually!

Across the sector, mass participation events were being cancelled and rescheduled left right and centre, not forgetting the biggest running event in the world, the London Marathon. Which was set to be bigger and better than ever to celebrate its 40th birthday with thousands of hopeful runners who had committed to a serious training plan and some wacky costume ideas. Sadly the historic format for London Marathon couldn’t be carried out in a safe manner with the virus still about, but that didn’t stop the passion, determination and dedication of those runners who faced a wet and windy autumnal day to clock up their 26.2 miles and raise vital funds and awareness for their chosen charities.

Take part in your own challenge now!

Why not take part in your own challenge and start raising vital funds and awareness for PCA today!

Up and down the UK, Pancreatic Cancer Action had some incredible supporters complete their 40th London Marathon race in their very own way.

From various pit-stops with breakfast goodies, much-welcomed drink breaks and a cheeky McDonalds trip for Tasha and Frankee in Team Purple.

To a dedicated Dad, Bob Allen, who cycled alongside his son, John (who completed the run in under 4 hours!) for support and encouragement. 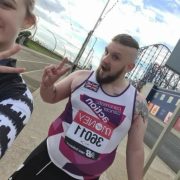 Chris said: “This day has been extremely difficult both physically and mentally but it’s fantastic that people from all over the UK have come together for this incredible charity that’s making a difference to people’s lives.

The pain from months of training and the event itself is nothing compared to losing someone to this terrible condition and it’s amazing that people from all over the UK have come to support myself and John during the Virtual London Marathon in aid of Pancreatic Cancer Action.”

Jane Brookes who had a photo of her late Dad in her backpack to stay with her throughout.

Super trooper, Sarah Towill, who slipped at mile-16 knocking herself unconscious but after a few hours in hospital and some stitches, powered through and completed the remaining 16 miles in memory of her Dad.

And many others who took to the streets of their local area and ran for those affected by pancreatic cancer.

It’s safe to say the Marathon buzz was well and truly in force this year, despite the uncertainty of the virus, the lack of crowds to carry you through those tough miles and the thousands of runners by your side encouraging you along and reminding you ‘You can do it!’. We are blown away by the success and determination of our runners, they continue to inspire us every year and they are the ones who make a difference! Without them, we couldn’t continue our vital work in changing the future of pancreatic cancer.