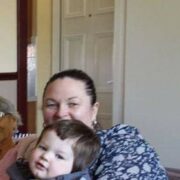 Teresa Muraska shares the story of her mum, Bridget Turnbull. Read more below.

My mum, Bridget Turnbull, went to the doctor on numerous occasions complaining of pain in her back radiating around the front, night sweats, indigestion, a feeling that something was stuck in her gullet, depression, rapid weight loss and late onset type two diabetes. At 79, doctors told her it was wear and tear, a hiatus hernia, her age, her diabetes causing her weight loss and her depression was because she was caring for her husband.

In two years, she was only ever sent for a chest x-ray until a new doctor joined the surgery and sent her for an ultrasound. This showed black lesions on her liver which they thought was a secondary cancer. An MRI was scheduled but she was rushed into the hospital before this appointment came through.

She was diagnosed on August 5th 2014 with pancreatic cancer, which had already spread to her livers and lungs. Palliative care was our only option. Mum passed away 40 days later on September 14th 2014. Tragically, my dad Dick Turnbull, who had watched his wife of 40-years suffer, took a massive heart attack and passed away 17-hours later on the 15th September 2014.

Pancreatic cancer destroyed our family and seven years on we live with this pain every day.