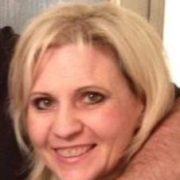 “He was the last person anyone expected to get sick. The picture of health”

Sue Whyte reflects on her husband, Chris, and his experience of pancreatic cancer.

My husband, Chris, was strong, fit and healthy. He worked harder than anyone I’ve ever met, had a great outlook on life, but most of all, he was a devoted family man. Everything he did, he did it for us. He was well-loved and well-respected in our local community, coaching boys football for many years. He would help anyone and everyone and was always doing a favour for someone. He had simple needs; time spent together as a family, with our boys, Kieran and Liam, was all he ever wanted. He was one of six kids and adored by his brothers, sisters, mum and dad.

He regularly went to the gym, did spin classes, and really enjoyed keeping fit. He tried to eat well, and was a naturally big, strong man.

In September 2014, he began to complain of a pain in his back. He had suffered with back problems in the past so assumed it was more of the same, although I do remember him saying the pain was a bit higher in his back this time.

He began to come in from work and go straight to bed, not wanting to eat a proper meal, not going to the gym, which was so out of character. I remember him calling me when I was out shopping and asking me to get to a chemist and get him the strongest over the counter pain medication I could get. He never took pills, so I was starting to worry.

A day or so later, he was in so much pain that he couldn’t go to work (unheard of), and we ended up at A&E. A doctor took his history, did a quick examination, and prescribed him muscle relaxants and pain killers.

What little he had been eating would come straight back up. He was losing weight quickly. I contacted our GP and requested an urgent appointment. The GP asked him if he was a new patient because there was hardly anything in his file. He explained that he had been with the same practice since childhood, but he hardly ever needed to see a doctor as he was always so healthy.

He examined him and thought his liver seemed swollen, so sent him for blood tests and an ultrasound. He called us when the test results came back and arranged a CT scan. The next day, we were called to go see him as soon as the CT scan results arrived.

Chris was told he had cancer. The GP didn’t know what type but said there were fractured vertebrae, a mass near the pancreas, and the liver function was also off. We both began to cry. How can we tell the boys? The rest of the family? Chris was 44 years old.

Our GP referred Chris urgently to an upper GI surgical consultant, who saw us the next day. He told us that Chris’ cancer was either pancreatic or pancreatic neuroendocrine. Either way, the cancer was advanced, extremely aggressive, and there would be no cure. It was our 21st wedding anniversary that day (23rd October) and our lives changed forever. It was a struggle to get Chris to these appointments. The vomiting and pain were so severe, and as soon as we got outside, he was sick again. We steered ourselves for going home and delivering this devastating news. He kept saying, “How will I tell the boys? My mum and dad?”

He said to me: “You’ve went through this with your mum (she had passed away a few years earlier with ovarian cancer) and now you have to go through it again with me, it’s not fair on you.” As always, everyone else’s welfare came before his own.

He was sent for a biopsy which determined that he had stage 4 poorly differentiated pancreatic neuroendocrine cancer, which had already spread to his liver and his spine. From there, he was seen by an oncologist, who recommended chemotherapy (palliative only to help relieve some of the symptoms). I was surprised how well he tolerated it considering he was constantly sick, but it did seem to help for a very short time.

Christmas came and it was bittersweet. In my heart, I knew he wouldn’t see another one. The New Year brought a steady decline, and it was around February when Chris was started on a morphine syringe driver for the pain and the nurses came in every day. The oncologist stopped chemotherapy and referred him to a professor who had a special interest in this type of tumour. They tried a new experimental treatment but Chris continued to decline.

He lost so much weight, about seven or eight stone in total. A series of hospital admissions along the way and Chris was losing ground. After a particularly difficult couple of days, Chris was given a bed in our local hospice. He died the following day, Tuesday 9th of June 2015.

It hurts to remember this in detail. I prefer to try and bury it and focus on the 21 good years we had before his short but devastating illness. If this reaches even one person and results in them seeking medical attention and gets them an earlier diagnosis, then it will be worth the pain of remembering.

He was the last person anyone expected to get sick. The picture of health.

He was my whole world. I met him over in my hometown of Toronto and moved over here to Scotland once we were married. He said he would always look after me and he kept that promise. He gave me two wonderful sons who were determined to make something of themselves as a tribute to their dad. I am so proud of them. As I started to pick up the pieces, I had been so inspired by the NHS staff who looked after us, that I retrained as a medical secretary. I’ve been working in the NHS for more than five years now and I love my job because it’s very rewarding.

If you have any of these symptoms and you know something is not right, get it checked out right away. The NHS is always there for you.