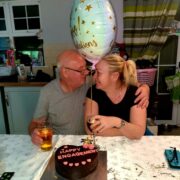 Stephenie Kelly shares the story of partner Kevin & his experiences with pancreatic cancer. Read on to find out more.

This is the story of my beloved partner, Kevin, whom I sadly lost on the 29th April 2021 to this horrible, cruel disease.

Kevin and I had sadly only been together just over four years when he passed away, but in that time, Kevin had always been well, never been sick. In his younger years, Kevin was very fit, as he was in the Royal Marines and served over 22-years with them.

I met Kevin on 11th March 2017 and we hit it off straight away and really never looked back after that. We got on really well and never had a cross word. We lived just over an hour away from each other and Kevin worked full-time as an IT engineer, so we saw as much of each other as we could. We had nights away together and holidays away as a family, as I have a young 15-year-old at home who adored Kevin, and Kevin adored him and had him spoilt.

In 2019, Kevin sold his house and bought one closer to where I live. He couldn’t wait to get moved. Things were moving slowly and we had a holiday in Florida for 14 nights at the start of July, which Kevin was adamant we were having as he wanted to take my son there. After we got back, contracts were signed for the house and it was all go and a quick move. This was to be our marital home, as we had started planning and making changes to the house, and doing it up bit by bit.

Kevin and I got engaged on the 4th August 2019, we took my family all out for a meal as they thought, but Kevin proposed to me in front of them as that’s what he wanted to do. My family all loved him to bits.

In February 2020, we started talking about planning our wedding and looking around venues, so at the start of March we went and looked at a venue, and I had been onto another place to go and look at it, but with Kevin’s work, trying to arrange a time was hard, and then the next thing we had the lockdown, so that put an end to the plans until we didn’t know when.

Then in August, my daughter was celebrating her 30th birthday, and just two days before that, Kevin started to feel sick. He complained of pain when eating, or if he did try to eat, sometimes he would throw up. Now a few months before this, if not a bit more, he had become reliant on indigestion tablets as he complained a lot of indigestion, but both of us never thought anything of it, to be honest, but once he started to feel unwell, and after a day or two, I was constantly on his case about going to the doctors. All Kevin kept saying was I’ll be alright, it’s only a bug or a virus. I was like no, it’s not, it wouldn’t be going on this long. I still kept on his case about going to the doctors as I told him I wouldn’t be at him the way I was if I didn’t care, but I guess it was a man thing.

A good three-four days before Kevin got his diagnosis, I started to do a bit of research myself, and pancreatic cancer was one that came up, and everything I was reading tied in with Kevin. I was like please, dear God, don’t let it be this. On the 4th of November, he got the call from the GP. She wanted to see him right away, so he went in and saw her, and she gave him the bad news that it was pancreatic cancer. He phoned me as soon as he got out. We were both devastated. Kevin was put on the enzyme tablet after his diagnosis, but it never helped him with his eating, and he still wasn’t able to eat, or days where he could, it was very little.

The following week, he was down in Altnagelvin Hospital seeing a specialist, and I was with him, and we were given a further blow that it was in the upper end of the pancreas, was quite big and entangled in the nerves and main blood artery, so they couldn’t operate. The only thing we could try was chemotherapy, but he was referring to another oncologist in the City Hospital in Belfast, as they wanted to see what grade they were dealing with.

Again, that appointment happened quickly and he had a procedure carried out where they took a piece, and we spoke with the oncologist who laid it on the line as regards percentages with treatment and no treatment. The oncologist told us he would phone and arrange another appointment as soon as the results were back, which was nearly two weeks. At this stage, Kevin was very weak and very tired, and having to go all the way to Belfast took it out of him.

They wanted to get treatment started as soon as, and they wanted to do it in Belfast, but I spoke out and asked could Kevin not get it in Altnagelvin, which was closer to home, and we were told they didn’t see any reason why not. We saw one of the specialist nurses that day too to sort out Kevin’s pain medication.

The following week, we were down in Altnagelvin, and Kevin was getting his line put in, in preparation for his treatment the following week. Halfway through the treatment, they did a CT scan to see if the treatment was having any effect on the tumour, but sadly it wasn’t. The tumour was still growing, and they also saw a lesion on the liver, which they said was probably cancer as well, as it had gotten bigger from the very first scan he had, as they thought it was nothing then, that it was just like a scar on the liver, which sadly it wasn’t. They then said they would give him a two-week break and we would try another type of treatment, but sadly, Kevin never got the chance because anything that could go wrong did.

His liver went completely off and they said about a blockage in the bile duct, to which he was taken for a stint to be put in. That was the first admission. Then not long after he got home from that, the fluid started to gather in his legs at first, and they had to be dressed as they were oozing. Then the fluid started to build up in his stomach, and I had to get Kevin admitted. He was kept in for a week at that time, and they put a pigtail drain in and let him out the next day, which they shouldn’t have done as they removed the drain before they let him home and the fluid was flying out through where they had the drain.

When Kevin got home he was soaked and I was raging that they had let him out and it was leaking like that. I had to change him and the dressing, and that wasn’t for the first time either. The district nurse phoned me the next morning and I told her and she hit the roof and when she got there, she soon got on the phone to get him admitted again as she said she didn’t understand why they didn’t put the permanent drain in and I agreed.

Kevin was admitted for two days again to get the permanent drain put in and was let home again. The wee male nurse that wheeled him down to the car on that Saturday, Kevin said to him that I just want to go home and die! That was the first time I’d heard him say anything like that because before that it was always like he had forever. He thought he had years when I sadly knew he didn’t. Even though he said that on Saturday, it was the only time he said it because after that he went back to “oh in two to three years’ time”.

This was only about two weeks before Kevin passed away at home, but at least I was there with him, as were one of my son’s, my daughter and my daughter in law, who was pregnant at the time. Kevin was looking forward to the birth of the new baby, but I knew he wasn’t going to be here for the birth, but at least they told him they were giving the baby his middle name, and he was blown away by that.

Kevin was surrounded by love when he passed away.