Our patron Sheila Fleet OBE, and her team have completed an amazing challenge. From their jewellery workshop in Orkney - they travelled virtually to Glasgow and back – a total of 1280 miles. As well as raising awareness, the team have also raised over £5,000.

To clock up the miles they walked, ran, cycled and rowed around their island base. They ‘set off’ on November 1st – the start of Pancreatic Cancer Awareness Month and they completed their challenge 19 days later on Thursday 19th November – World Pancreatic Cancer Day.

Sheila sadly lost her husband Rick to pancreatic cancer 2013 and as Patron, she supports us in many ways, including her Daisies at Dawn collection, where every sale gives a donation.

A team of 33 completed the challenge. The team included Sheila, son Martin and his wife Mairi.

As well as raising money, awareness and remembering Rick, the challenge was also hugely motivating. It gave the team a goal, got them out exercising, boosted their wellbeing and left them energized.

Rick was a keen and very talented photographer and many of his photos inspired Sheila’s designs. As the team covered their miles, they took a series of stunning photos which showcase the island’s beauty – and makes us all want to visit! 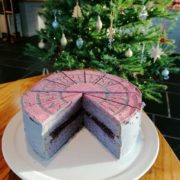 We also hope if we ever get to Orkney, we may be able to sample the ‘Rick-toria Sponge’ cake which is named in his honor – and looks delicious!

Martin Fleet said “We are delighted with the distance that the team has covered, over 1280 miles in total. We covered the distance to Glasgow in just five days and knew we were going to push the challenge further than the initial 638 miles. It’s an incredible achievement by the team to double our goal.’ Martin adds ‘A big thank you must go to Mairi Fleet as well who collated everyone’s miles and organised the fundraiser.”

Murray Easton, Head of Fundraising and Supporter Relations said: “We’re delighted that all of the team at Sheila Fleet Jewellery took part in this challenge and that they got so much out of it in terms of their health and wellbeing. Thank you to Sheila, Mairi, Martin and the team for their support in increasing awareness about the symptoms of pancreatic cancer and for smashing their fundraising target. We are determined to make the 2020’s the decade of change for pancreatic cancer and this level of support makes a real difference.”