Jill Murray of Sandbach has organised for the Sandbach Town hall to be lit up purple from the 13th November until Thursday 30th November for Pancreatic Cancer Action to Turn It Purple in pancreatic cancer awareness month.

The Town Hall will be lit up using purple gels that will be placed over the light which are being kindly donated by a local company ‘Hipswing’. The Operations Manager, Karl Brown, at the Town Hall has helped arrange for the building to be lit up during the month.

Jill says, “As a family, we knew nothing about the signs and symptoms of Pancreatic Cancer. Often symptoms are so vague that the alarm bells don’t ring until it is far too late to do anything.” 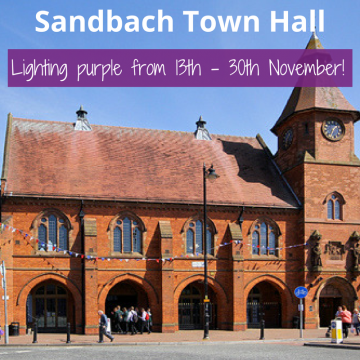 “Having now been in the position of losing a precious family member who was so fit, healthy and vital, we are passionate about bringing an informed awareness of the disease to others. Hoping that knowledge may help others to be diagnosed in time for surgery.”

“Lighting up Sandbach Town Hall with Purple is part of our campaign to raise awareness of this disease and of the charity Pancreatic Cancer Action which does so much to educate and invest in research projects into potential methods of early diagnosis.”

“I would like to thank Tansy and Scott Shorrock at Hipswing for arranging the gel covers and Karl Brown from the Town Hall.”

Pancreatic cancer suffers from a chronic lack of awareness across the UK, highlighted by a recent survey by Pancreatic Cancer Action. Awareness in the North West is only 7%.

Turn It Purple is Pancreatic Cancer Action’s flagship awareness month campaign which takes place every November. It is a chance for families, friends, and communities to unite to show their support for those affected by pancreatic cancer. It is also an opportunity to raise awareness of the disease which will soon be the UK’s 4th biggest cancer killer and has the lowest survival rate of all common cancers – just 5%.