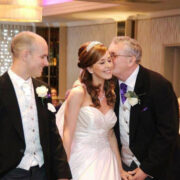 “The pain, hallucinations and wait for his suffering to end was torture and made worse by the desperation that had dad received a correct diagnosis earlier, treatment may have been possible.”

We lost my Dad in August 2016, just 11 weeks after any suggestion he may have cancer.

Since January 2016, my Dad had visited the GP with symptoms ranging from loss of weight pain when eating reduced appetite and intense stomach pain. The doctor diagnosed Dad with IBS, and referred him to a dietician who helped to create a nutrition plan to manage this illness.

Despite six visits to the GP, no scans were done and he was told his symptoms were relating to IBS and the need to manage it appropriately. He was sent away and despite intense pain, put off visiting the GP again because he felt he was a burden and he needed to wait it out until the flare ups died down. It wasn’t until dad saw a Locum GP, who sent him immediately for a scan, that it became apparent how gravely ill he was.

By the time Dad received his CT scan results, the cancer has metastasised to the lungs and was classed as stage five which was untreatable. He was told he had weeks to live; months if he was lucky, and had to start preparing for his death. He left clear guidance for everything and planned as much as he could knowing within weeks, he would lose everything he knew.

The detoriation over the next few weeks was heart-breaking. Dad was too weak to even start chemotherapy the final three weeks were spent at home, cared for by family. The pain, hallucinations and wait for his suffering to end was torture and made worse by the desperation that had dad received a correct diagnosis earlier, treatment may have been possible.

We are left with memories of a man worked his whole life to provide for his family, only to have his retirement end almost before it began. His granddaughters, Emma and Katie, now 13 and 11, have been robbed of the chance to spend time with the most loving Grandad imaginable and it is my only hope that progress is made to stop families going through what we have with better detection, training for GPs and treatment.