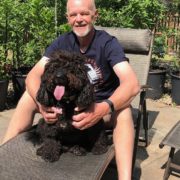 This is the story of how Russell went from being a fit and healthy 59-year-old man, enjoying life with his wife, Helen, and two children, Thomas, and Cassie, to being diagnosed with pancreatic cancer, the deadliest of the common cancers. 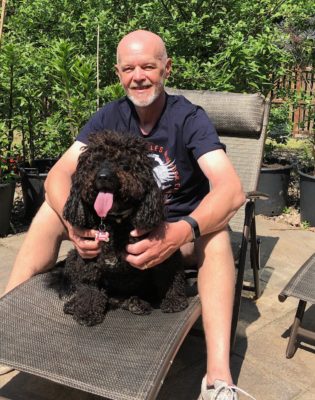 It was December 2019 when Russell began to experience several unusual symptoms.

“I was feeling a little unwell and had a loss of appetite, I was losing weight, I also noticed that my urine was quite dark coloured, and my stools were light coloured. My skin was also yellowing although I or the people around me had not really noticed that.”

This prompted him to visit his GP surgery, where they arranged for him to undergo a blood test. Not long after, Russell’s doctor rang to inform him that the tests were abnormal and suspected that he had a gallstone blocking his bladder, something that had happened 2 years previously.

On January 9th, 2020, Russell was admitted to hospital for further investigations including an endoscopy and a CT scan, and later had a stent inserted into his bile duct to elevate the jaundice.

Shortly after his endoscopy, Russell was visited by the specialist who informed him that they suspected that he may have a tumour on the head of his pancreas and that he would need to visit a different specialist for another opinion.

Russell visited the specialist at the end of January, and it was not good news. He was informed that there was a 2.5cm tumour on the head of his pancreas and the only option was to undergo an emergency Whipple procedure, likely followed by a course of chemotherapy.

Despite the urgency of Russell’s condition, he was told that he would have to wait 3 months to have the Whipple procedure due to large waiting times. A worrying prospect considering over 80% of pancreatic cancer patients die within 3 months of diagnosis.

“Finally, after several pleads by my wife, they said that they could try and refer me to Kings Hospital in London as they had previously agreed to take some cases off Morriston on a referral basis.”

Kings Hospital agreed to take on Russell’s case on the condition that Russell came for a consultation, which included a PET scan and pre op assessment. Russell and his wife headed up to the hospital on the 12th of February.

“Both my wife and I were shell shocked as they then ushered us into a side room with the cancer nurse who proceeded to give us McMillan brochures, cancer brochures and Whipple brochures while all the time saying it was likely to be cancer, but they would not say for sure.

I can honestly say that that hour in the nurse’s office was the worst experience I have ever had in my life, bar none.”

On the 16th of February, Russell checked into Kings Hospital and said a tearful goodbye to his wife, who was staying in a nearby hotel.

“I woke at about 8pm in ITU surrounded by tubes, leads and drips feeling rough. The operation had taken Mr Menon 10.5 hours to perform.!”

“The result of my Whipple was that the tumour was cancerous, approximately 3cm in size but they had removed it successfully and there was no spread.”

Russell’s surgery was such a success that he was out of bed within 2 days and released from hospital just 8 days later. However, his journey of physical and emotional recovery had only just started.

“I tried to keep mobile as much as I possibly could, walking every day and trying to do more around the house and garden.”

“Don’t get me wrong, there are tough days and then even tougher days when all you want to do is curl up in a ball and forget everything exists. Emotional, I have never been so emotional as I have since the operation, I could have cried about something almost every day “.

The treatment had also caused Russell to lose 3½ stone from December 2019 to March 2020 and he was then told that he would need a follow up course of chemotherapy. 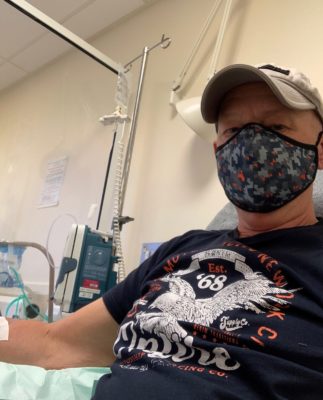 “I cannot say I was looking forward to having 6-months chemotherapy, nobody would, but you have to do everything you can to try and ensure that you beat the cancer.”

Now looking back on his journey, Russell appreciates just how lucky he is to be in the 26% of people who survive 1 year after a pancreatic cancer diagnosis.

“Onto today, I am getting better and stronger every day and even though I still have ‘dark’ days when I don’t feel 100% I do feel lucky in a way, lucky I got referred, lucky that they agreed to operate, lucky it was just before the pandemic started, lucky that they went ahead with my chemotherapy but above all lucky that I have a loving, strong and determined wife and also children (20 & 25) who supported me all the way through this journey.

I know that I have won my battle against Pancreatic Cancer and maybe there will be more battles to come but it does help to try and stay as positive as you can.

Life for me and my family has changed, we have a new outlook on life and whatever the future may hold in store we try to make the most of every day we have together.”

We’re currently running our PCAware Wales campaign to help improve awareness of pancreatic cancer across Wales and ensure more people have outcomes like Russell’s. Click here to find out more.