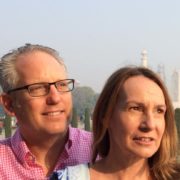 “When you get a call within three hours asking you to come in, you know it cannot be good news”

Robert Jones reflects on his wife Wendy's experience with pancreatic cancer ahead of his charity Kilimanjaro climb.

Late in 2018, Wendy picked up a cold virus and felt something was wrong. She never did quite feel 100% when in April 2019, she also developed swelling of the legs (blood clotting). Although restricting her movement, she still worked in London, commuting x4/5 per week from Bath.

Following a number of medical and blood tests via a GP that all came back negative, she was eventually referred to a Rheumatoid & Arthritis specialist, who apart from more blood tests, proposed a CT scan.

When you get a call within three hours asking you to come in, you know it cannot be good news. They confirmed the scan had shown what we didn’t want to hear; she had stage four pancreatic cancer.

Working with our oncologist/s, Wendy was referred to Bristol NHS and undertook clinical trials and started chemotherapy in August after a short period of consultations and medication adjustments, and the opportunity to take some ‘me time’ to understand her diagnosis and the journey ahead.

That journey thereafter was certainly a rollercoaster. Two courses of chemotherapy with the aim of life longevity (unmeasurable) and to maintain a quality of life, which became post-chemo pretty much zero. Wendy decided she no longer wanted to continue with this course of treatment and we undertook palliative care and support working with Dorothy House, a charitable care organisation based in Bath, and also one of our chosen charities.

Wendy fought & remained courageous to the end. My son and I both managed to spend time with Wendy up to and including her passing. She had accepted the card she had been dealt in life and now rests in peace with the angels, a star that shines ever brighter just 25 weeks from original diagnosis.

Robert and his son, Harrison, will be starting their fundraising adventure in memory of Wendy, starting from today. The pair will be starting their walk up Mount Kilimanjaro from today! They will be taking to the Machame route, following a seven-day itinerary, averaging circa 15kms per day over seven days, walking seven or eight hours a day, with four days up and three days down!

The trip, which was originally due to take place in August 2020, is now taking place after two cancellations due to COVID. We hope to keep you updated on how Robert & Harrison do on their journey. If you’d like to read more about Robert’s fundraiser, or if you’d like to make a donation, you can do so here.