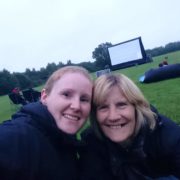 “To say our family’s world had shattered was an understatement”

Rachel Austin shares with us her mum Shenna's story. Read more below.

Mum’s story begins with experiencing indigestion-like pain that radiated to her back, and over a couple of months, it got progressively worse. She was not the sort of person to complain about ailments or go to the doctor unless she absolutely had to, so by the time she saw him, the pain was pretty bad.

When the first set of blood results were inconclusive, another set were ordered, but before the results came back she experienced such unbearable pain that she went to A&E. They gave her something for the pain and did scans. She accidentally overheard doctors talking about her case and that’s how she found it it could be a tumour in the pancreas. In any case, she came home pending results.

Being just a week away from my dad’s 60th birthday and a planned trip away for the week, she just wanted to make sure she was able to go and enjoy time away with our family, including her four young grandsons who were all under four at the time, and so she didn’t say much about the hospital and played it down to us. So we went away and not much more was said really until a family gathering a couple of weeks later on Father’s Day.

We had all got together again on a lovely warm day with the paddling pool out for the boys and we had a great time with water fights. Lots of laughter! All of a sudden, mum and dad came out of the house really serious and told us mum’s diagnosis. She just couldn’t keep in any longer and the thought of not being able to enjoy those fun moments was so painful to her. To say our family’s world had shattered was an understatement. We all just cried there in the garden and I think every day for at least two weeks until we started to come to terms with it.

Mum had lots of appointments after that and was put on the list to start chemo within 30 days, and given tablets to help digest her food as her pancreas wasn’t doing its job. The tumour had wrapped around the main artery, making it inoperable, but did not look like it had yet spread to other areas. She was under the care of the MDT (Multi-Disciplinary Team), which consisted of lots of different types of specialist doctors who could assess her case and decide the best course of treatment.

She started FOLFIRINOX mix of chemo. We were so proud of her for fighting it. She wanted to be around for “her boys” as long as possible. She prepared for chemo by purchasing a wig in advance, which she named Lola, but she faired pretty well on it. The doctors found a mix of anti-sickness meds that worked for her, and she was able to function fairly well between treatments, with some hair loss but no need to bring Lola into action.

Halfway through her first cycle (six of 12 I think), she had a scan to see how the chemo was affecting the tumour. It had shrunk by 25%! A great result which the MDT thought meant she may actually have a shot at surgery if it kept progressing well. She got through the full cycle and the scan showed it had shrunk another few mm. Mum was doing so well though that they kept her going on chemo a little longer. She was starting to show signs of limits, with numbing in her fingers, though, so they made it less frequent while they made the decision that she would now be a candidate for surgery, a Whipple.

Before her 16th and final chemo, she wanted us to all go abroad on holiday together, so she had her central line out, and we all had a great holiday in Mallorca. When she got back, she had one more chemo. She decided to go ahead with the surgery, despite the huge risks with the arty, and if the tumour was more extensive than they thought from the scans, they would just sew her back up or perhaps even have to remove the whole pancreas.

We talked it over and it was literally either try or die. Mum was a fighter so, of course, she felt she had to try. At the end of August 2018, she went into surgery. We were expecting around six hours, but she was in for nine worrying hours. They had not been able to do a Whipple (remove part of the pancreas) and had had to do a total pancreatectomy and splenectomy, rendering her diabetic overnight.

Her recovery in hospital was long and hard as she could not keep food down, had a feeding tube up her nose and had to learn how to manage her blood sugar levels. But at least the tumour was gone!

While in hospital, her morale went to an all-time low, not wanting to see anyone outside immediate family, and losing a lot of weight. My dad was an absolute rock for her during that time (through all of it, in fact), being at the hospital every single day.

After three and a half long months, she was finally allowed home in time for Christmas. It was so good to have her home. She was the centre of our family circle and the one who had held us up, but it was our turn to try and help her.

The doctors had not looked to give her further chemo as planned after surgery as she didn’t have the strength to cope with more, and they were worried about the numbness in her fingers and toes she had experienced, although feeling was slowly starting to come back.

So she settled into life with diabetes, which was so very difficult for her to manage. Plus she continued to lose weight and then experienced further bowel issues. After check-ups at the hospital, she was told the cancer was back in May 2019, and it was again incurable. She had gone through all that and it was back anyway, soul-crushing.

I’m not sure it ever really registered for me that time as she was here had made it to two years and she’d had surgery and she was my mum and just had to always be there. The doctors booked her in for radiotherapy in the August and we booked another family holiday for just after to all enjoy together to keep her going and make more memories.

At the end of July, she and dad had a couple of days away camping with my brother and his family. When they got home, I went round to visit on the Saturday and with the boys, but mum was so tired and didn’t feel well, so she went to They admitted her that day to keep an eye on her and I spoke to her on the phone saying I’d see her the next day.

Dad rang me the next morning saying I needed to get up to the hospital. When I got there, she was pretty much unconscious, and the doctors told us they had put a DNR on her file, and that the next 48 hours were crucial. She got through the 48 hours, but she was in a lot of pain and was put on palliative care meds to keep her comfortable. We lost her on Thursday, 1st August 2019.

The cancer had metastasized without us knowing and it took her. She was camping less than a week before she died, she most definitely lived her life to the full!

I often wonder if the surgery was worth it. In hindsight, I don’t think it was for mum. It took more from her than it gave, but if you don’t try, then you’ll never know what could have been. We all miss her EVERY. SINGLE. DAY. Perhaps with the help of organisations like PCA, the surgery can be more successful in the future. I live in eternal hope that it will. x