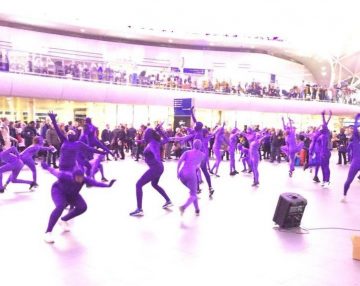 30 dancers in purple morph suits surprised and delighted commuters at Kings Cross Station as they broke out into a spontaneous performance to make people more pancreatic cancer aware on World Pancreatic Cancer Day.

The flash mob was organised by national charity Pancreatic Cancer Action, who have launched a national campaign pancreaticcanceraware.org to improve early diagnosis of pancreatic cancer by raising awareness of the signs and symptoms. Individuals and organisations are also encouraged to sign up to the Pancreatic Cancer Aware pledge and commit to helping to spread awareness.

The concept of the performance, carried out by Living the Dream Dance Company, was inspired by the World Pancreatic Cancer Day theme ‘In It Together’. The routine included tracks such as Stronger Together, Jessica Sanchez and Fight Song, Rachel Patten to demonstrate that if we stand together early diagnosis of pancreatic cancer is possible and survival is achievable.

The Pancreatic Cancer Action team were speaking with the public asking them how much they knew about pancreatic cancer, asking questions such as ‘Can you can any of the symptoms?’ and ‘Do you know the location of your pancreas?’. Of all the people asked on the day not one person answered correctly. This was to be expected however as pancreatic cancer has suffered from a chronic lack of awareness. A recent survey carried out in October 2016 showed that 70% do not know the location of their pancreas and over 60% know nothing about the symptoms of pancreatic cancer.

Lu Constable, Marketing Executive from Pancreatic Cancer Action, says: “There is a desperate need to give more attention to this disease that has been neglected for far too long and we wanted to make a noise about it.
“The flash mob was a great way to show the world we are #InItTogether in the battle against pancreatic cancer and to draw attention to pancreatic cancer and the need for greater awareness.”

Pancreatic cancer is the fifth biggest cancer killer in the UK and has the lowest survival rate of all common cancer at just 5%, a figure which has barely changed in almost 50 years. Across the UK nearly 10,000 people a year will be diagnosed with the disease and with the survival rate so shockingly low almost 9,000 of those diagnosed will not survive. 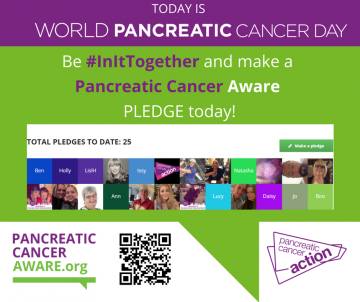