Our Published Study: Understanding symptom appraisal and help-seeking in people with symptoms suggestive of pancreatic cancer 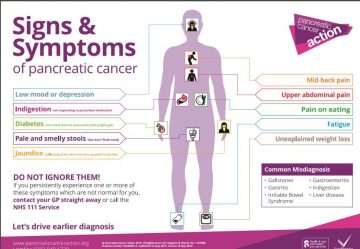 In 2013, we announced that we were funding researchers at the University of Cambridge to identify the key symptoms associated with pancreatic cancer.  The study involved a questionnaire and data record analysis of patients referred to hospital for a range of potential pancreatic cancer symptoms, which included a number of in-depth qualitative interviews.

We are delighted that the study Understanding symptom appraisal and help-seeking in people with symptoms suggestive of pancreatic cancer has been cited on the British Medical Journal site.  It’s a reflection of a growing interest in early diagnosis of pancreatic cancer in the medical community.

About the Symptoms Study

The study, which was carried out in seven hospitals in two regions in England, involved over 391 participants who were recruited between Jan 1, 2011, and Dec 31, 2014.  They were all aged 40 years or older and had been referred for further tests as there was suspicion of pancreatic cancer:

What were the key findings?

“Although we identified no initial symptoms that differentiated people diagnosed with pancreatic cancer from those without pancreatic cancer, key additional symptoms might signal the disease. Health-care professionals should be vigilant to the possibility of pancreatic cancer in patients with evolving gastrointestinal and systemic symptoms, particularly in those with diabetes or mental health comorbidities.” Dr Fiona Walter, University of Cambridge

How will the results of the study help improve pancreatic cancer diagnosis?

The study is a call to action to healthcare professionals, as well as the public at large, to be aware of the key signs and symptoms of pancreatic cancer, which will ultimately help in the fight against pancreatic cancer.