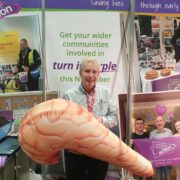 As a moderately overweight, but otherwise fit and healthy 70-year old I thought I was invincible and would live forever.

I had no earlier symptoms at all, but my urine started going a darker colour. I supposed I had a urine infection and was able, as a pharmacist, to treat this with a short course of antibiotics. It did not improve and over the next few days, I began feeling nauseous.

Fortunately, I was due for my annual review with the practice nurse so I took along a, very red, urine sample. She dipped this and said there was protein present but reckoned it needed a repeat. Two days later I took in another sample and had a telephone consultation with my doctor. Blood samples were taken. After the results came back the surgery contacted the hospital to try and get me admitted.

Had a call from the hospital consultant, who called me in the same day. Nil by mouth overnight and then had an ultrasound followed by a CT scan. I had talked with one of the doctors about the options. It was likely either to be gall stones blocking the bile duct or more serious cancer. Gall stones are usually very painful, and I was in no pain, so the latter seemed more possible.

The CT result confirmed that there was a 24mm Stage 2 pancreatic cancer. At that point, even as a pharmacist, it was not a cancer that I knew much about.

I was kept in for a few days, and they performed an ERCP, which was to try to unblock the bile duct and try to relieve the symptoms caused by the Bilirubin which was turning me yellow and causing uncontrollable itching all over my body.

This initial treatment failed to help much and it was repeated a week or so later. In the meanwhile, I was booked for a PET scan. This was deemed to show whether there was spread to lymph nodes beyond the actual pancreas. Fortunately, there was very little spread.

This all occurred just before Christmas, so it was no great surprise that surgery proposed was delayed until after the New Year. I was given various information, asked to attend a brief seminar about pain relief and tested to confirm I was well enough to be operated on.

Much of this work had been done at the newer of Bristol’s hospitals, but the surgery proposed, a Whipple procedure is rare and only done at two centres in the South West so I attended Bristol Royal Infirmary on 7th January 2020. Even right at the last moment, there was a delay while they confirmed there would be an intensive care bed available after the operation. All this tends to add to the tension!

The operation took all day from about 10.30 until around 8.00pm, I of course knew nothing of this.

Things did not go smoothly. After a full day in ITU, it was decided that I had sepsis and was taken back into theatre and cleaned out. Followed by the use of very powerful anti-biotic and anti-fungal medicines. This is a risk when cutting open multiple intestinal tubes.

I was in intensive care for about 10 days and then moved to an individual ward as I was still an infection risk. In all, I was in the hospital for about 9 weeks. To anyone reading this, take heart from the fact that this is much longer than most, as my experience was rare.

Fortunately, I had the opportunity to go home just before the hospital got involved in the first Covid-19 wave. I doubt I would have had the immunity to combat a Covid infection at the time.

As I went home, I was still on an infusion anti-biotic with the district nurses coming in every day for another 10 days.

A couple of interesting observations. I was told that I may not be diabetic as the remaining pancreas may work well enough. I have found my blood sugar is constantly a little high and may need insulin. The next is that I lost quite a lot of weight, about 20Kg (over 3 stone) and am no longer overweight. The Whipple cuts away part of your stomach and I now find I really can’t eat anything like as much as before, so my weight loss has been stable.

I then had a struggle with the pancreatic drains which stubbornly refused to dry up. This then delayed the start of the backup chemotherapy which is recommended post-op. Eventually, they did dry up and chemo started late July 2020, running for 6 months. This is not the best experience as it caused dreadful fatigue as well as nausea, vomiting and bowel problems.

Gradually, after chemo finished I started feeling stronger and more alert. In the nine months or so since then, I have been working again in the pharmacy and doing the business paperwork, VAT returns etc. without any great effort.

Although I have found this experience humbling in many ways, I consider myself a fortunate survivor of what is so often dreaded cancer. I am approaching 2 years since my first symptoms and even those could have been ignored.

My advice is to be constantly alert to anything which feels ‘odd’ to you. Do not ignore any changes and insist that they are investigated. Don’t be one of those whose condition is not recognised until it is too late.