This is Penny’s story. 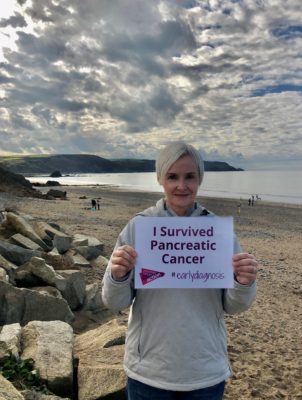 Penny was working as a midwife and was fit and healthy when she was diagnosed with advanced, terminal cancer in 2013 when she was just 50 years old.

Penny started to feel extremely exhausted and noticed a vague pain on the left side of her chest which made her go to her GP who signed her off with a viral infection.

Penny knew that this wasn’t right so she went back every week protesting as she was aware that her father had died of pancreatic cancer. “I wasn’t any better and that without a definite diagnosis I felt guilty taking the time off work.  At the same time, I was however very relieved as I was just so tired.”

After further trips to the doctor, A&E and tests, Penny was told that she had lesions on her lungs and did in fact have pancreatic cancer.

Penny says, “The date was April 17th 2013, I will never forget it. I left that appointment in total shock but with the idea that since my dad had died 28 years ago, things must have moved on and I would be cured.”

Slowly and carefully, and with almost brutal honesty, my consultant told me that my tumour was too advanced and involved with the major hepatic vessels and due to what appeared to be secondaries in my lung the disease had become metastatic.

I was told that I had months to live. He briefly touched on chemotherapy as a palliative option but he stressed that it would be gruelling and if my life was going to be measured in months, I may want to consider not having it.

Penny was given chemotherapy to control the tumour but a CT scan showed that incredibly, the chemotherapy was reducing the size of it.

Penny says, “After 12 cycles followed by 28 daily radiotherapy treatments combined with oral chemotherapy we had the amazing news that my tumour had become operable!

We had had many emotional setbacks. My doctors were always puzzled by the lesions in my lung which disappeared during chemo and never returned. I will never know if they were secondaries. I had to wait an agonising month after my last radiotherapy to see if they would come back.

On April 1st  2014 I had a distal pancreatectomy and had my spleen removed during six hours of surgery. The plan was for a Whipples but I was luckier than that and the operation I had, although very major was less aggressive.”

Penny is now a 6 and a half year survivor of pancreatic cancer. She will be running her first marathon on her 57th birthday in Athens.

“I am an insulin dependent diabetic now and have no spleen which means my immunity is compromised but I manage it well. I have learned to live in a new ‘normal’ as life will never be the same.

My health is my wealth and very precious to me, physical and mental. I make it my priority in order to cope with physical and mental health issues that I am left with. I am grateful to the specialist team that saved my life, the support I had from PCA and for the future I have to look forward to.”

Penny saw an article in the Daily Mail from Pancreatic Cancer Action about their founder and survivor, Ali Stunt, and the symptoms that led to her diagnosis. This resonated with Penny and made her push for further tests.

“Without seeing the article about Ali’s story and the symptoms she described I am not sure I would not be here. Which leads me on to say how vital the work that Pancreatic Cancer Action undertake is. The awareness campaigns they run and medical education they give, is key to others having the same outcome as me.”

“Despite the still terrible survival statistics, raising awareness is key for the improvement of them however small. People do survive and the opportunity for curative treatment is there if the disease can be caught early enough.” 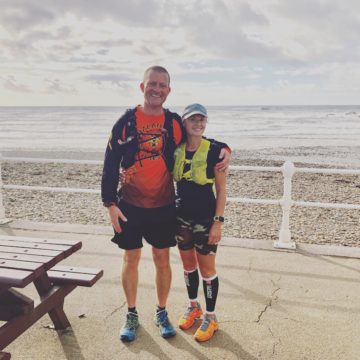 Penny has used her passion for running to stay focused on her physical and mental health, and has incredibly just completed the Athens Marathon.