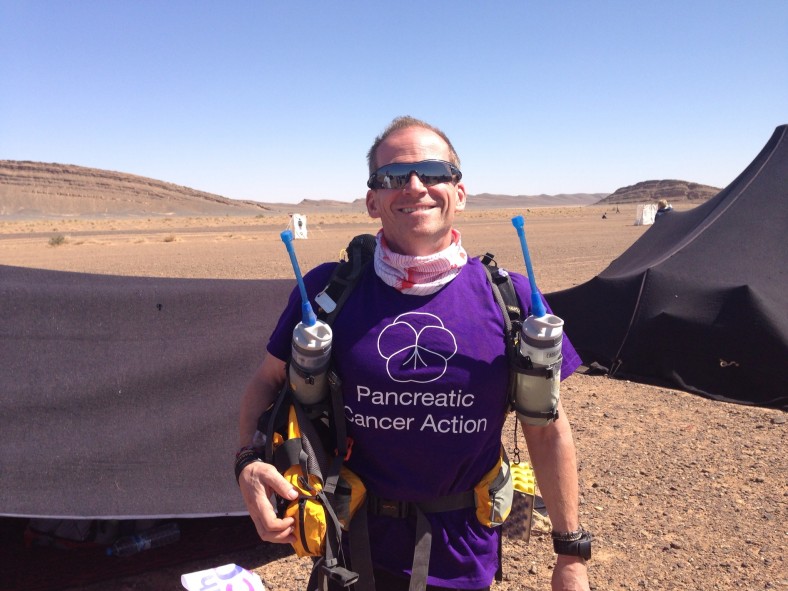 Paul Bowker has been training hard over the past year for what has been billed one of the toughest footraces on Earth – the Marathon des Sables.

According the the event’s own website, the Marathon des Sables, known simply as the MdS, is a gruelling six-day adventure through a formidable landscape in one of the world’s most inhospitable climates – the Sahara desert. The rules require you to be self-sufficient, to carry with you on your back everything except water that you need to survive. You are given a place in a tent to sleep at night, but any other equipment and food must be carried.

Paul decided to do this to raise money for two charities; Pancreatic Cancer Action, in memory of his father, and the Back-Up Trust.

Not only has Paul completed the race, but he managed to finish 489th out of 1030 who started – a phenomenal result!

And Paul has so far raised a staggering £30,000 to be shared between the two charities which is an amazing amount for an individual fundraiser to raise. We here at Pancreatic Cancer Action are delighted with this and we would like to thank everyone who has sponsored Paul, but most of all to Paul himself who has put himself through such a punishing training schedule before competing in such a gruelling event!

If you would like to donate, Paul’s fundraising page is still open and can be found by clicking here