Me and My Pancreas

I had a distal pancreatectomy in January 2009 to remove a tumour from my pancreas followed by seventeen sessions of chemotherapy.. I was very surprised to learn afterwards the severity of the illness but taking a positive view I was always determined to get better and not be held back by cancer. Now almost ten years later I have been extremely lucky. Since retiring I have enjoyed life and I am able to use some of my time to do a few things for Pancreatic Cancer Action and volunteer for CRUK. The only downside is a recent diagnosis of Type 3c diabetes due to having only a small part of my pancreas left but I can live with that. I am so glad to be alive. 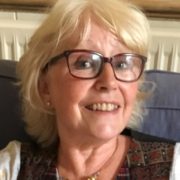 In January two thousand and nine

A lady in hospital did pine

The pancreas was resected

No treatment was rejected

Then she came home feeling fine