Valerie began experiencing symptoms whilst at her brothers funeral, before later being admitted to hospital to find out that she did in fact have pancreatic cancer. This is her story. 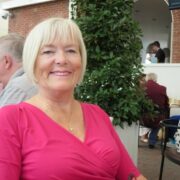 It was July 2009. We had just come back from a wonderful holiday in Aruba in the Caribbean. I then lost my brother aged 56 following a two year battle with kidney cancer. At his funeral I kept scratching all over my body and we all thought it was stress related.

I went to my GP who prescribed some emollient cream but after another few days it was no better. I woke up in the middle of the night and was alarmed at the colour of my stools and urine.

We visited the GP the following morning and saw a locum as the first appointment of the day.

We repeated to her much as above including what symptoms and outcome we had seen on the computer and she referred to books from the shelf in the consulting room.

And she told us to go home and she would telephone a colleague at the local hospital and she would ‘phone us back after her surgery.

She telephoned me very quickly, within the hour and told me to go to A&E.

We went straight to A&E.

I was admitted as an in-patient. 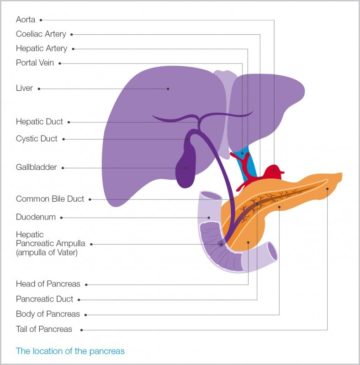 A couple of days later I had an ultrasound scan and then an endoscopy and a CT scan. A couple of days later we were informed that the CT scan was clear but the endoscopy had found a blockage on the bile duct which was possibly a cancer of the ampulla (see diagram for location of the Ampulla of Vater). While doing the endoscopy the hospital had put in a stent to relieve the jaundice. My yellowing faded away and the itching decreased.

We then saw the hospital consultant who told us there was an operation that could cure the problem, a Whipple’s. Broomfield Hospital did not perform this but they were in touch with the Royal Free and arranged for me to see Mr Fusai.

We quickly had the appointment at the Royal Free and when we attended I was admitted and Mr Fusai arranged for another endoscopy and CT scan. The outcome was that he advised me that I was a suitable candidate for the Whipple’s and that I should have it as soon as possible.

I went home and was re-admitted for the operation a few days later.
I had the Whipple’s operation on 17th September. The operation is a major undertaking which takes many hours in theatre. The immediate recovery period has to have much pain control and is uncomfortable and seemingly never ending.

The operation was a success and I feel very lucky to have been able top have it as most sufferers are diagnosed too late. They had found a very small tumour on the ampulla. Mr Fusai suggested that I might need course of chemotherapy. In the event, when I attended Broomfield, I was told that in their opinion because of the size of the tumour (and the fact that the lymph nodes were clear) there was no reason for me to have any chemotherapy.

Once I had been diagnosed my local hospital staff at Broomfield and at The Royal Free treated me sensitively and speedily. I have nothing but praise for the HNS treatment I received.

Then, as now, I have trouble digesting my food. But with Creon (a pancreatic enzyme) I am mostly coping with the situation. I live my life as close a possible to normal and experience ‘toilet emergencies’ while we are out from time to time: I have many very understanding friends who support me when things are difficult in this regard – we walk regularly and holiday, including abroad, frequently. I remain fit and at a weight barely half a stone less than when I had the operation.

For 30 months or so I had regular check-ups with CT scans every six to eight months and blood tests, and was seen by the Broomfield oncologists during that period. I saw a Nutritionist who concluded that there was nothing she could suggest to improve my dietary habits.

In the summer of 2012 my blood marker 19.9 tests suddenly increased without any identifiable reason. I remained healthy within myself and I had no other symptoms. The check-up period was changed to 10 weeks and the blood results continued to worsen. The CT scans however remained clear.

The blood results reached a peak of 292 in the first half of 2013. And then, again without any changes in what I was doing, started to come down. They currently stand at 96. I will be having a scan on 6th January which will be followed by a blood test and a visit to the oncologist towards the end of the month.

So far as I can see and feel, I remain healthy and we look forward to this coming September as this will mark five years since the operation.