Nikki tells her story of being treated for chronic pancreatitis, before later being diagnosed with pancreatic cancer. 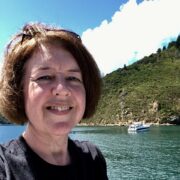 My name is Nikki and I’m a 52 year old woman living in Reading, Berkshire. I was born and grew up in New Zealand and had a healthy, active lifestyle which continued when I emigrated to Britain in 1990. The only times I’ve ever been in hospital was having my appendix out when I was 21 and having my collarbone repaired after a horse riding accident in 2007. Both were short stays.

That all changed in April last year. I’d been suffering the odd episode of what I thought was heartburn which I didn’t take much notice of, being a lady of a “certain age”. However, one morning I fainted in the shower which I’d never done before (the fainting, not the showering! ) so I went to my GP who wasn’t particularly concerned about the fainting but perked up when I mentioned the heartburn. He recommended me for an endoscopy which was booked for 22 May. I look back at this as the beginning of the process that probably saved my life. Two weeks before the endoscopy appointment, I woke up one night feeling like I’d been kicked by a mule in my stomach and the pain did not go away. After three days of on-off excruciating pain, my husband Simon took me to A&E at the Royal Berkshire Hospital and, despite a battery of tests, they found nothing. However they didn’t check my stomach due to me mentioning I already had an endoscopy booked.

I had the endoscopy on 22 May as scheduled, having had more attacks of pain in the meantime. The procedure revealed my digestive tract to be perfectly healthy and the consultant who did the endoscopy recommended I have an ultrasound to check my gallbladder as he felt I may have had gallstones. Two days after the endoscopy, I collapsed at work and was rushed to Hammersmith hospital A&E (I work in London). Again, tests showed nothing wrong so I was not admitted and told to go back to my GP. He scheduled an ultrasound for 22 June and I was signed off work for a month as I was having repeated bouts of extreme pain with occasional nausea.

The ultrasound showed there was nothing wrong with my gallbladder but that the head of my pancreas was inflamed. I was referred to the Upper GI department of the RBH for treatment and a CT scan which took place on 14 July. Again it just showed that the head of my pancreas was inflamed and I was told I probably had pancreatitis, so I was referred to a  pancreas specialist within the RBH. I was signed off work for another month during which I continued to have attacks. I had weekly blood tests which only showed elevated inflammatory markers and slightly raised sugar levels. On 17 August I had an MRI scan which still only showed inflammation of the pancreas head and by this stage my consultant was convinced it was the beginning of idiopathic chronic pancreatitis. He was baffled as to why I should have it and constantly quizzed me about my drinking habits – I have to say I have never been much of a drinker and I found that pretty insulting and he seemed to be implying I was lying. I know my husband is still angry about this fixation of the consultant’s. I have to say this period is the only time I felt I didn’t get exceptional care and I credit my GP for constantly pushing for more tests.

From this point on I was just being monitored with a provisional diagnosis of early chronic pancreatitis. Since my initial attack in May I was following a strict virtually fat-free diet and drinking plenty of water. By now I had lost over two stone in weight, most of it in the first month of the illness. I was convinced I had cancer but none of the myriad tests I had showed anything. I had an EUS (endoscopic ultrasound) on 13 Oct that showed no change. The consultant tried to take a biopsy but failed. I carried on with weekly blood tests as before and went back to work full time. I continued to have discomfort and the occasional episode of pain but this seemed to be controlled by the diet and by getting on with things. I had accepted this was how my life was going to be, having researched pancreatitis which is a horrible condition.

Another MRI on 30 Nov showed no change and my life carried on with occasional discomfort and a feeling of not being 100% well. In January this year I had a week where I had sudden debilitating attacks of intense pain but these never lasted more than ten minutes. Simon and I went on our planned holiday to New Zealand in February to visit my family and looking back, I’m convinced I was so focused on getting out to see them (the holiday was booked a month before I became ill), plus the restricted diet, that my body actually suppressed the cancer for a time (this is not medical opinion, just how I feel).

Now my cancer story really starts. The holiday went well despite having some days of feeling ill and one painful attack. However on the day before we returned to the UK, I felt very unwell and never felt better even after coming home. I thought I’d picked up a virus but a week after coming back (1 March) I developed jaundice and unbearable biliary itching. I have to say, that was the worst thing out of everything that’s happened! Luckily I had a follow-up with my biliary hospital nurse on 2 March and she ordered an “emergency” CT scan which could take up to two weeks! After two days of extreme discomfort my marvellous GP paid a home visit (very unusual) and put pressure on the hospital to scan me which happened on 10 March. I then had a call from the biliary nurse on 13 March telling me I needed an urgent ERCP to fit a stent to relieve the jaundice and this had been booked for 17 March. However the next day (14th March) I took a turn for the worse and was admitted to hospital with biliary sepsis. I have to thank the swift action of the emergency GP at my local surgery for getting me admitted directly as my temperature was over 40 degrees and I was barely conscious.

I was given an emergency blood transfusion to make me strong enough for the ERCP and I was told by a doctor that my most recent CT scan had showed some significant changes but wouldn’t tell me what that was. I had the ERCP on the 17 March and the stent was fitted and a full biopsy done (not by my original consultant, interestingly – his colleague was the complete opposite, absolutely wonderful). The following Wednesday (22 March) I was told I had a large adenocarcinoma in the head of my pancreas and that yes, I had cancer. There was no evidence of spread and it was possible I was suitable for surgery. I was discharged two days later and told to eat what liked (hurray)! No more pancreatitis diet! The nurses at the RBH couldn’t believe how strict I’d been with myself – it turns out I was actually malnourished but that was also because the cancer was interfering with my nutrient uptake. 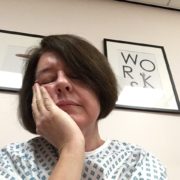 I had an appointment at the Churchill cancer hospital in Oxford where I was told my tumour was borderline operable as it was estimated to be 5cm (turned out to be 7cm!) – the doctor there seemed bemused that the consultant at the RBH hadn’t picked it up earlier but as we know, pancreatic cancer is not easy to detect and I’d shown no sign of cancer until the jaundice. I’d had several cancer marker tests which were negative. I was taken through the risks of the procedure (Whipples PPPD – they saved my stomach) but I once I knew I was suitable for surgery, I went for it! My age and general good health were big factors and I was encouraged to spend the two weeks before surgery eating as much as I could in order to put on some weight to see me through the procedure. So it wasn’t all bad! I also signed up for three trials – one trying two different joins for the pancreas to the intestine (PANasta), a study on the effects of anaesthesia and the 100,000 genome project looking at DNA analysis for future treatments.

I had my surgery on 13 April this year and it went very well – I was only in theatre for five hours and made a swift recovery. All my drains and tubes were removed after three days and I was discharged after five. My surgical team all came down to discharge me full of smiles and said everything couldn’t have gone better. It was a nail-biting two weeks waiting for the follow-up which would tell me my results but again it was great news. Although my tumour was large and a T3 (had started to break out of the pancreas), all the tissue around it was normal, none of the 35 removed lymph nodes had any cancer and there was no metastasis. Official grading was adenocarcinoma of common bile duct pT3N0(0/35)M0L0V0R0. So I have been lucky.

I am now waiting to have adjuvant chemotherapy as an insurance – my oncology appointment is on 12 June to discuss my options. The chemo is voluntary but I’m going to do it – there is no guarantee that the cancer won’t come back even if I do have the chemo but I would kick myself if it did and I hadn’t had the treatment. My prognosis at the moment is as good as it can be and for the first time in over a year, I actually feel well (discounting surgery healing).

I suppose the upshot of all this is, even though I have had a good result, it just goes to show how hard it is to detect pancreatic cancer. And the surgery is huge and takes a long time to recover from. On days when I feel sore or tired, I look at my scar and think how lucky I was to be able to have the surgery that has probably saved my life. Just being suitable for the surgery has put me into the sadly tiny survivable bracket. We need to be able to detect this cancer earlier and more research and funding towards this is urgently needed. I want more people to have the chance I have had.

I plan to be one of the 5% that lives longer than five years and I hope that percentage gets bigger sooner rather than later.