Mick was diagnosed with in-operable pancreatic cancer in 2000 and told that he had just 4 months to live. Refusing to accept this, his wife insisted on a second opinion and Mick was later able to undergo a lifesaving Whipple procedure. 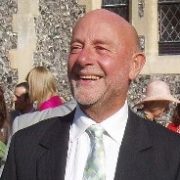 It started in September 1999 when I was working in a Special School and finding it hard to be as active as normal. I was 57.

By the November I felt very tired, and took two days off… the first time in my working life I was not well!

I went to the doctor three times, but by December I was looking yellow.  I was told I had stress. This was stupid, so I went to see my old Doctor who was semi-retired. He immediately sent me to the local hospital in Southend. I had a scan, was told my bile duct was constricted by a tumour and it was pancreatic cancer. A stent was inserted, and gradually the bile would flow away.

The doctor said I was in-operable, and had about four months to live.

My wife refused to accept this, and got the name of a specialist at the Royal London. We spent two horrible weeks waiting to see if an appointment would come.

After my notes were lost my wife phoned the Royal London and got me an appointment to meet the surgeon in London in early January 2000. He questioned me at length, sent me for another scan, and I had to be back in the Royal London the next day.

I returned, got in bed, was tested and told an operation would be next morning. At about 6.30 next morning I went down, and the next thing I knew was coming round three days later in a ward. It was then I found I had had a Whipple Procedure. I spent four weeks in hospital, then went home. I was able to return to part-time work in the May.

I continued my recovery, and was delighted to go back full-time in September 2000.

I was closely monitored by my doctor for two or three years, then every six months, then annually. Because all the tumour was out I didn’t have chemo.

I am now 67, very active and feel good. It’s true I have had other illnesses since 2000, (phlebitus, bad reflux, de-hydration) but I got over these.

I had a wife who wouldn’t accept my fate and a brilliant top surgeon, and team, to do the op. I look forward to whatever comes along now.