Michael’s describes his experience of undergoing a Whipple procedure in 2007 to remove the tumour from his pancreas, and later being eligible for CyberKnife® radiation treatment.

I am very sorry to announce that Michael lost his battle with pancreatic cancer on 8th October, 2011. Michael was one of the very first people I met who had had pancreatic cancer. Michael and I swapped stories about our own experiences of the disease many a time and through our shared experiences we became friends. I will really miss Michael and am desperately sad that he has passed away. I am keeping Michael’s story up on the website as he was keen to pass on his experiences to others facing the same. We send our condolences to Michael’s family & friends. – Ali Stunt, Founder of PCA, October 21st 2011 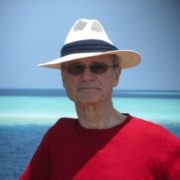 In September 2007, I went to have a routine blood test carried out and when the results came through I was found to have a very high liver count. I went to my local consultant and was diagnosed with pancreatic cancer. It was a 4cm tumour in the head of the pancreas and was also wrapped around the mesenteric artery. I had a Whipple procedure at the end of September. My surgeon managed to remove the tumour from the pancreas and the mesenteric artery but was not able to take the extra 25% margin normally required. I have nothing but admiration for him & his considerable skill. I then underwent three months of three-week cycles of chemotherapy followed by five weeks of daily radiotherapy, this followed by a further three months of chemotherapy (gemcitabine plus capecitabine).

I was in remission for 21 months until May 2009, when it was found that the cancer had returned; but it was very small ( about 2cms), isolated and had not spread. This made me an ideal candidate for CyberKnife® (stereotactic radiotherapy) treatment. In order to be given the treatment, my case had to be discussed and agreed by a multidisciplinary team. Very fortunately I had private health insurance and they agreed to cover the cost of this treatment, which was very expensive – about £25,000 in total. A team at the Harley Street Clinic carried out the procedure.

Initially small gold fiducial markers were implanted into soft tissues in or near the tumour to act as a guide for the CyberKnife® radiation beams. They can be seen on an x-ray and act as a tracking device for the CyberKnife® to follow. Prior to the treatment, a plastic mould was made for my body to enable me to be comfortable during the treatment (which normally lasts about an hour), during which it is very important to remain motionless. I was scanned a week before my treatment started to verify the size, shape and position of the area to be treated. This scan was in addition to any scans I previously had.

The treatment itself is a very precise form of radiotherapy using high doses of radiation delivered by a high number of beams delivered from different angles, but aimed very exactly at the tumour and area around it. High doses of radiation are delivered to the centre of the tumour but lower doses are directed at the surrounding tissue near the tumour to ensure they suffer minimum damage. I had 3 sessions of treatment, which were given over a period of 3 days using 151 beams per treatment, of which 51 were high doses and 100 lower doses.
I was most impressed by the sensitivity and empathy to my needs shown by my treatment team at the Harley Street Clinic. They were truly amazing. I was also looked after by an excellent symptom manager, with whom I could discuss any symptoms experienced from the treatment. She would either contact the appropriate person to respond to me or provide the necessary advice herself.

After treatment I had to wait three months and then have a CT scan and PET scan. The aim of the treatment was to kill the tumour. The results of the CT scan were positive, so the tumour appeared to have been neutralised. However the PET scan showed that there was still some activity there. The oncologist felt that the CT results were positive and that since the PET Scan can produce inaccurate results, it would be a good idea to wait for another scan in six months time to see whether the tumour had returned.

I feel that it is important to be aware that CyberKnife® is an inexact and unproven procedure for pancreatic cancer – I was only the 23rd person in the UK to have it. It is important that anyone thinking of having this procedure is aware of this. I felt that the treatment was rather over optimistically described to me and I feel a little disappointed to find that it has not been more effective. However I am glad to have had the treatment because if nothing else it has bought me time. I also feel very strongly that everyone is an individual case and will react differently and clearly the treatment must have been effective in a number of cases for it to be made more readily available to pancreatic cancer patients. I also am sure that having had a Whipple operation, chemotherapy and radiotherapy before the CyberKnife® treatment, I was more susceptible to the side effects from the treatment.

I now find it very hard to put on weight due to the problems I have absorbing nutrients. Having been an avid foody in my past life I am now sadly not interested in food any more, since I am having to stick to blander recipes which do not stimulate my appetite. Therefore I try to graze frequently, having smaller helpings so that my stomach can digest the food more easily. I am concerned how my low weight might impact on my ability to tolerate chemotherapy in the future. Unfortunately I have recently been diagnosed with Irritable Bowel Syndrome, which is causing me considerable pain and discomfort. I am however being treated for this condition and am hopeful my quality for life will improve shortly.