Ceridwen became jaundice 27 weeks into her pregnancy, shortly after giving birth she was diagnosed with pancreatic cancer and later received a Whipple procedure to remove it. 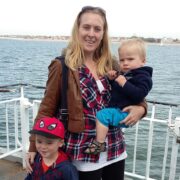 I was pregnant with my second child, 34 years old, and had a healthy pregnancy up to 27 weeks when I started to become jaundice (the day before Christmas Eve!), firstly I started to itch, mostly on the palms of my hands, soles of my feet and my chest.  Then my urine turned dark and I had steatorrhea.  I got in touch with my midwife immediately and they organised blood tests which showed my liver function was abnormal.  But I was then treated for a rare condition that happens only during pregnancy, Intraheptic Cholestais of Pregnancy, basically a lazy liver!  I was sent home and told to come back the day after Boxing Day for more blood tests and to monitor the baby as this condition causes stillbirth or premature delivery of the baby.  I then started to turn yellow, firstly my eyes and my maternity team decided to keep me in hospital to do some investigations as my level of jaundice was not common in this condition.  I had ultrasounds, which showed, as they put it, ‘sludge’ in my bile duct, indicating a blockage.  I then had and MRI which isn’t usually done during pregnancy but as my blood tests were showing my liver results rising to very concerning levels, we agreed it should be done, but the imaging didn’t show any other results other than this apparent sludge!!!  After 5 days I was discharged, I had some medications to take to try and reduce the bile acid build up, but I had to return every other day to have blood tests and the baby’s heart monitored in case he became distressed, or as the condition can cause still birth, they needed to make sure the baby was still ok.

This monitoring continued for a further 4 weeks and one day out of the blue, the baby decided it was time to arrive, 7 1/2 weeks early!  The labour was quick, terrifying, worrying, no pain relief as my blood work was still showing an unhealthy liver, and he was whisked away after being allowed to hold him for about a minute.  I was told that my liver would return to normal now I had given birth, but in the days that followed, I gradually became more yellow and my blood tests were still showing rises in my liver functions.  One of the blood tests I had showed alarming results 6 days after the birth, and by the end of that day, I had an endoscopy arranged as it was clear something else was going on.

When my son was a week and a half old, still in neo-natal unit, I had my endoscopy and was told after that a cancerous tumour had been found in the head of my pancreas.  They had taken a biopsy, allocated me a MacMillan nurse and would go back the following week for results.

A week later, I was told by the Hospital it was cancer and I was being referred to the Royal Marsden and I had an appointment at their Sutton branch the following day. Here I was told it was Adenocarcinoma, stage 3 and locally advanced, the tumour was 3cm and abutting the portal vein and coeliac axis and at this point was inoperable, but they felt positive that with chemotherapy and radiotherapy it would shrink enough for surgery.

It had all been such a whirlwind, but all I can remember thinking, is that I would have to give up breast feeding and that if I died, my 2 boys would have no memory of me at all, my eldest son wasn’t even 2 years old and the baby was less than 3 weeks old.  My husband and I didn’t ask any questions at this point as all we wanted to do was start the treatment as soon as possible and get me well again, for me, dying was just not an option.

And so after having a port fitted and all the necessary scans, 4 weeks after diagnosis I started chemotherapy, I had 13 cycles altogether and was incredibly fortunate that I had minimal side effects, 5 days after treatment I would have one day when I was extremely tired, but thanks to my very supportive family, they were on hand to take the boys when I needed to rest, but mostly I was still able to look after them.  I had one scare from one of the Doctors during my chemotherapy, we were having a chat one day about what usually happens after chemo and he told me I may be offered radiotherapy, but usually someone with my diagnosis would then be put on a palliative programme.  This was the first time I felt my fight against this horrible disease was over and for a few days, I was crying all the time, especially when I was around my boys, I didn’t even tell my husband as I didn’t want to worry him.  I spoke with my keyworker a few days later as I was so upset, and she told me that she didn’t agree with what the Doctor had said and spoke to my main Oncologist who confirmed that the plan was to continue as we agreed with radiotherapy and then surgery.  The relief I felt was immense and I could have kissed everybody at the Marsden that day!!!

My chemo came to an end, I had a scan and was told that I had had an excellent response to the treatment and 30 sessions of radiotherapy was to follow!  I had my last session on New Years Eve, a year and 1 week to the day my symptoms first started!!

I had a 6 weeks break and met with the Surgeon who would be performing my Whipple procedure and thankfully my next round of scans confirmed that I was now operable and on 2nd March 2016 I went in to have the tumour removed, and all the other bits that come with it!!!  Apart from my pain relief not working in the days following the surgery, I can honestly say I have recovered well with minimal side effects.  I am back to a normal diet (except for high fat and sugary food), I mostly have good days, though I get the odd day where I feel exhausted, but I guess that’s having 2 kids and major surgery and it is still very early days in my recovery.

I used to be a long distance runner prior to my diagnosis and although I did try and keep up my running during treatment, it wasn’t something that was a priority, but now I have finished my treatment, I have my eye on 2 marathons to run in 2017 and will be shortly starting my running again so I can take part in those, all to raise money for Pancreatic cancer of course!!

It is with a heavy heart that I have to let you all know that since my cancer returned in October and my stay in hospital with Sepsis, my training for the Marathon took a few steps back. I have now started another 6 month course of chemotherapy and although I am tolerating it well, no side effects except tiredness, I thought I would be able to get back on track. My boys have recently been poorly and I haven’t been able to get out to train. So, I have decided to pull out and I don’t want to let anyone down as you have all been so kind with your donations, I have asked my lovely sister Sarah-Jane to take my place, and being the supportive big sister she is, she has agreed!! But, I don’t want to not take part completely and I will be doing the 10k instead that runs along side the Marathon that day!! And joining me of course, is my amazing Twin sister, Kathy!! We have made it a family occasion to support the charity who helped me through my diagnosis and treatment and I hope you can all support us, especially Sarah-Jane as she runs in my place. Thank you all so much for your generosity already, and thank you to those in advance for your donations. It really is appreciated. Ceri xxxx

It is with deep sadness that we have to write this post today.  Ceridwen Maddock Jones, an incredible lady sadly passed away on Wednesday 17th June after a five- and half-year battle with pancreatic cancer. She was incredibly passionate about supporting the work of PCA and was determined to raise as much awareness as possible for pancreatic cancer – to make sure others didn’t have to go through what she was.